Alaafin of Oyo, his royal majesty, Oba Lamidi Olayiwola Adeyemi 111 is one of the first class kings in yorubaland known for having a strong desire in choosing fair and pretty woman as his Olori. The monarch steps out in style to social functions with his seven younger alluring and beautiful queens in glamour and opulence.

Alaafin of Oyo and his youngest wife during her matriculation ceremony

The traditional monarch surrounds himself with the younger seven beautiful wives and usually seen wearing the same textile fabric with them. His love for beautiful women is evident from various pictures of himself and his gorgeous wives seen severally at different social functions both in Nigeria and abroad. 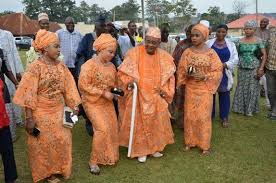 Alaafin and his wives

Olori Badirat Adeyemi, the beautiful and youngest wife of the Oyo Monarch, looks absolutely gorgeous and pretty. The stunning queen who celebrated her birthday on the 3rd of November, 2016 is enjoying royalty in the best way possible. The 27-year-old beauty has two children for the monarch who also celebrated his 78th birthday on the 15th of October 2016.

Recall that Alaafin of Oyo, Oba Lamidi Adeyemi, threw a big party for his youngest wife, Ayaba Badirat Adeyemi, during her matriculation in University of Ibadan.

Related Topics:Alaafin of Oyo
Up Next

10 Celebrities And Their Look Alike

Olajumoke: From Bread Selling To Blogging