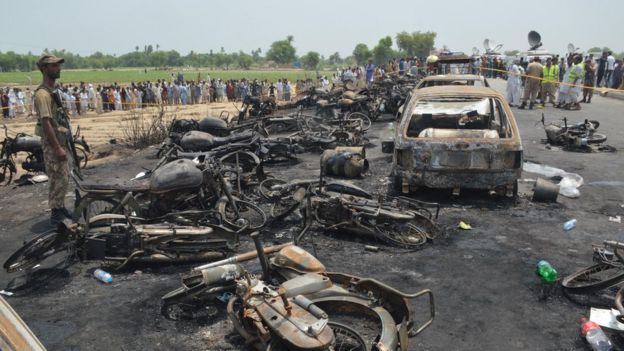 At least 140 people were killed when a lorry transporting oil burst into flames near the Pakistani city of Ahmedpur East, local officials say.

A crowd had gathered, reportedly to collect fuel leaking from the overturned vehicle when it caught fire. Dozens are being treated in hospital.

It appears the tanker blew a tyre while rounding a sharp bend in the road.

The subsequent fire may have been sparked by a cigarette, rescue services told the BBC.

“One of the passers-by lit the lighter to start a cigarette and the untoward incident which was a minor [one]… turned into a major blast,” Jam Sajjad said.

The country’s roads are notoriously dangerous, with poor vehicle maintenance and reckless driving contributing to the problem.

Pakistani media have published pictures from the scene, showing charred bodies and vehicles. There are fears that the death toll could rise further.

Some victims may only be identified by DNA sampling as bodies were so badly burned in the incident, reports say.

Police sources told APP the tanker had been carrying 25,000 litres (5,500 gallons) of oil and had been travelling from Karachi to Lahore.

It slipped off a road and overturned in the Kachi Pul area, they said, about 8km (five miles) from Ahmedpur East, in Punjab’s Bahawalpur district.

“People living in roadside villages, carrying domestic pots rushed to the scene to collect oil and they also made phone calls to their relatives living in other villages to immediately come to collect oil,” the sources said.

Traffic police had tried in vain to keep the crowd away from the tanker as people, including women and children, continued collecting oil in pots, the sources said.

“Suddenly, [a] huge fire erupted in the oil tanker which engulfed all people standing around the vehicle,” the police sources added.

“According to the initial reports, somebody tried to light a cigarette,” igniting spilt fuel, Jam Sajjad Hussain, spokesman for the rescue workers service, was quoted by Reuters news agency as saying.

Ahmedpur Sharqia Health Center and Bahawal Victoria Hospital have no such units but some casualties were brought to Nishtar hospital in Multan and others were being moved to hospitals in the city of Bahawalpur, about 50km away, BBC reports.

Suicide Bomber Blows Self Up In A Failed Attack On Mecca