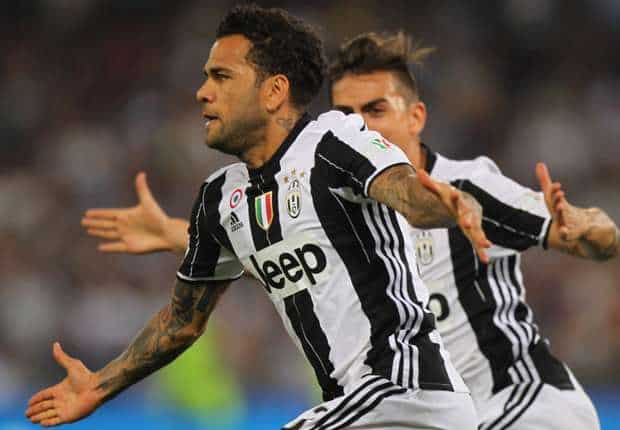 The Blues had hoped to sign top targets Benjamin Mendy and Kyle Walker before securing their other options but are close to a deal for the Brazilian.

Manchester City are closing in on a deal for Juventus right-back Dani Alves, Goal has learned.

City are targeting four full-backs this summer and it has now emerged that Alves was identified as one of the four top names in April.

The Premier League club are also working on deals for first-choice targets Benjamin Mendy, the Monaco left-back, and Kyle Walker, the Tottenham right-back.

Txiki Begiristain, City’s director of football, had hoped to conclude deals for Mendy and Walker before signing the Blues’ other options, Alves and Southampton left-back Ryan Bertrand.

But despite renewed efforts in recent days City are yet to agree on transfer fees with Monaco and Tottenham.

Senior City sources remain confident of signing their top two targets but Alves could now become the club’s third signing of the summer, following in the footsteps of Bernardo Silva and Ederson, as talks with Juventus have advanced significantly in the last 48 hours.

Whereas Monaco and Tottenham are keen to make as much money as possible for Mendy and Walker, Juve are thought to be requesting a relatively nominal fee for Alves.

The former Barcelona man, like Mendy, Walker and Bertrand, is also keen to link up with Pep Guardiola and City sources expect the team to agree personal terms swiftly.

Alves was a key member of Guardiola’s dressing room at Barcelona and it is believed the Catalan wants to bring more big personalities to the Etihad Stadium this summer.

Though Guardiola is happy that he has a committed, loyal squad of players under his command, he has identified Aleksandar Kolarov as one of few colourful characters in the squad and believes Alves will bring a lot to his team, both on and off the pitch.

Guardiola has also stressed the need for City to adopt a winning mentality in almost every area of the club, on the pitch or otherwise, and Alves is also expected to contribute in that regard, given his long and successful career at the top level.

The 34-year-old demonstrated throughout last season that he still has what it takes to play the kind of intelligent, high-intensity football that Guardiola wants from his City full-backs in the coming years.

Those are traits identified in Walker, Mendy and Bertrand, and City will continue working on those deals in the coming days and weeks.

Despite recent reports that some of City’s Premier League rivals, such as Liverpool and Chelsea, could swoop in and tie up a deal for Mendy, sources close to the Blues’ decision makers believe the France international has his heart set on a move to the Etihad Stadium.

City are aware that Monaco would be happy to keep the 22-year-old, should they not receive what they regard as a suitable offer, but the Blues are determined to bring him to the club as he has long been identified as one of Guardiola’s priority targets.