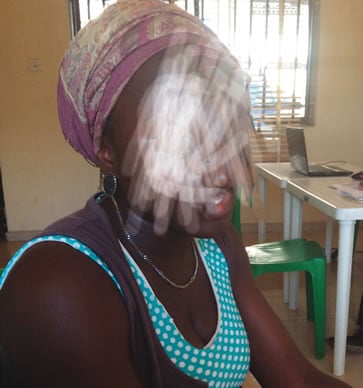 An house help Victoria Ezekiel, has revealed details of  Alhaji Usman Adamu’s role in the death of Joy Odama, a 200-level student of the Mass Communication Department of the Cross River State University of Science and Technology, CRUTEC

I am Victoria Ezekiel. I am 19 years old.

How did you know Alhaji?

I was selling corn at Nizamiye Turkish hospital, Jabi, Abuja and he used to buy from me. He informed me that he needs a cook and asked if I could prepare Tuwo, rice and other local foods and I said I could. So, he took me to his house on Friday October 7, 2016 and he asked me to resume duty on Saturday. When I went to his house in Karmo, I saw Martha and Nurse Gift. There was one other girl; a house help named Gift. I started working in the house and he agreed to pay me N15,000 monthly.

On December 20, when I was in the kitchen, I felt dizzy and I fell down. I later called Alhaji on the phone that I wasn’t feeling well and wanted to go home. He offered to take me to the hospital. I waited for him till 8pm but he didn’t show up. I normally close by 7pm. He took me to the Federal Staff hospital, Jabi. The doctor examined me and said I had malaria. I was given a form which Joy (Odama) helped me to fill. When we returned home, Alhaji said it was late and that I should sleep over. Joy, Nurse Gift, a girl we call ‘small Gift’ and I went to bed. In the midnight, I wanted to urinate and I saw Joy lying down beside me.

In the morning, I couldn’t stand up. I could only hear noise in the apartment. They rushed me to the hospital, gave me drip and I felt better. It was later I heard that Joy died and I was asking what happened to her. The doctor was also surprised. He asked me if it was the girl that filled my form the night before. We were waiting for Alhaji to come and settle the bill but he didn’t show up till 6pm.

What happened after you were discharged?

Alhaji came to take me home and I also called my sister to come to his place to pick me. Because my legs were swollen, I couldn’t walk, so she came with a cab and took me home. It was sometimes in January, 2017 when Alhaji called me on the phone and said they had buried Joy and that he gave her mother N200,000. He was telling me stupid things before he inquired about my health. He later told me that I would need to make a statement. I went to his house and we went to Karmo Police Station and a policeman said that I should mention Alhaji’s neighbour who lived upstairs as the person that locked the generator door. I told him I didn’t know the person, and besides, I was sick then and why should I lie against the man? Alhaji hit me on the back and called me a fool in Hausa.

When I got home, I informed my mother about what they asked me to say at the police station.

me on the back and called me a fool in Hausa.

When I got home, I informed my mother about what they asked me to say at the police station.

Can you remember other things he told you about Joy’s death when he spoke to you on the phone?

He said he had settled Joy’s case and that he gave the mother N200,000 and the DPO N1m to cover up the case.

Why do you think he told you all that?

I don’t know. I was surprised that he didn’t call me to ask about my health, but instead, he was telling me all these things.

Why do you think the policeman asked you to lie against his neighbour?

I don’t know, maybe they wanted to implicate the neighbour. They wanted me to lie that it was generator fume that made us sick.

How many of you took ill?

First, I was the only one and later, I heard that Joy died. When we got to the hospital, Alhaji was saying it was generator fume that made me sick but the doctor said there was nothing like that. He said I had malaria.

Do you remember eating or drinking anything before you too became sick?

I ate rice in the morning on that day. I was cooking spaghetti for lunch when I became dizzy. But I remembered that I was given an injection by Nurse Gift when my private part was itching a day before. I had a drug I used to take for toilet infection, so the nurse offered to give me injection. She wanted to give me a second one but I declined. She gave me the injection on a Tuesday. It was the next day I felt sick and was taken to the hospital.

How many girls were in Alhaji’s house when you fell sick?

They were Nurse Gift and small Gift, Martha and Joy. Many girls used to come there.

What do they come for?

They come for sex with him. He gives them money after sleeping with them. They would enter his bedroom and lock the door. There was a certain day he asked me to boil water for him so he could take his bath. I mistakenly opened the door and he was sucking their private parts. All the girls were all Unclad including him. Some married men always come too. Sometimes, he shares bags of rice to them.

Do you know most of them?

Some of them come from Gwagwa and Nyanya. I didn’t have the time to ask them questions. All I did was to serve them food when they visit. Initially, I was working with a house help, Faith, but he sacked her.

Why did he sack her?

Are you aware if Alhaji did anything to Joy the day she slept in his house?

I didn’t know because I slept off the moment we got back from the hospital. But the day she came, I saw her inserting something into her private part, something that looked like a cotton ball. I later learnt that it was Nurse Gift that asked her to do a swab for medical test. One Baba was coming to the house and he would write something like Arabic. He would be saying ‘Zar ka kawo kudi,’ meaning he would bring the money, he would bring it by God’s grace.

He is a Mallam?

How many times has Joy visited the house?

The first day she slept there was the day she died. Alhaji called her that I was sick and that she should come and take me to the hospital. After she assisted me in the hospital, she was asked to sleep over because it was late. I usually go home around 7pm every day. We were four that slept in the house that night. The house is a 3-bedroom apartment.

Did the then Karmo DPO visit the house?

Yes, he used to come to Alhaji’s house. They are very close. Anytime he visits, Alhaji would offer him suya and wine. Sometimes, Alhaji would ask me to fry pieces of meat for the DPO.

Did Adamu ever attempt to have sex with you?

Yes and I refused. He was telling me to come into his room and I said for what? He said were those entering his room not my mates. I said you called me your daughter yet you are pestering me for sex. He persisted. But there was a day he asked me again and the nurse knocked at the door, he then left me.

Does he sleep with the nurse too?