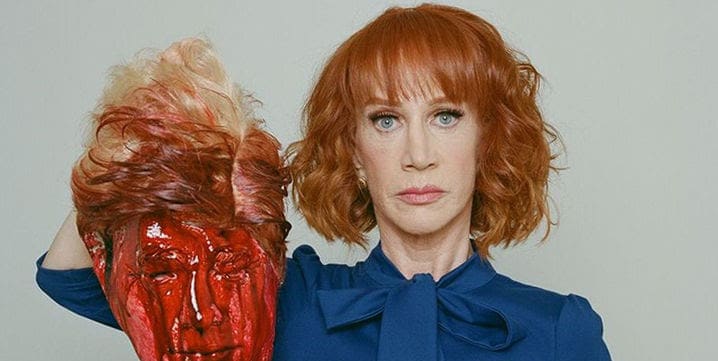 Kathy Griffin is an American stand-up comedian, writer, producer, actress, and television host is know for controversial jokes but this time around she took it over the edge with an image of her holding an action most people including CNN didn’t find funny.

NaijaNews.com presents you with all Griffin’s previous controversies.

1. She Was Banned From Appearing On Several TV Shows

Although some talk show hosts welcome her humor on their programs such as Craig Kilborn, Bill Maher and Howard Stern (who she credits with giving her a “straight fanbase”), Griffin has claimed to be banned from appearing on several TV shows including The Tonight Show with Jay Leno and The View. She got re-banned from The View because of a joke she made about Barbara Walters. She says Ellen’s producers told her they cannot have her on “trashing celebrities”,but she appeared as a guest on The Ellen DeGeneres Show on September 11, 2007. One of the most notable controversies occurred when she made a joke during a 2005 E! televised event that the child actress Dakota Fanning, then age 11, had entered drug rehabilitation. This incident got Griffin fired from hosting duties on E!’s red-carpet award show coverage. Nevertheless, E! purchased rights to air My Life on the D-List for its British channel, a fact she noted in an episode of season 3.

2. Griffin Was Banned From Apollo Theater

In a July 2009 episode of My Life on the D-List, after using profanity in an Octomom joke during her routine at New York’s legendary Apollo Theater, Griffin claimed that she received a letter banning her from the venue.

3. Termination Of Appearance On Hannah Montana

Griffin has claimed to have been fired from an appearance on the show Hannah Montana, on account of her Emmy acceptance speech. According to Griffin “the instructions literally came down, ‘We don’t want her anywhere near the building.'”Griffin hit back in her comedy act joking that Miley Cyrus “…has been flashing her green bra and posing topless.”

Kathy Griffin, Michael McDonald and Karri Turner performed an improved skit for soldiers and airmen in Tikrit, Iraq, March 17, 2006.
The second season, which premiered on June 6, 2006, earned Griffin the 2007 Primetime Emmy Award for Outstanding Reality Program, non-competition, on September 8, 2007. She received it during the Creative Arts Emmy Awards, which was hosted by Carlos Mencia and aired on E! on September 15. Griffin stirred up controversy with her acceptance speech, saying,

“Now, a lot of people come up here and thank Jesus for this award. I want you to know that no one had less to do with this award than Jesus. He didn’t help me a bit. If it was up to him, Cesar Millan would be up here with that damn dog. So all I can say is suck it, Jesus, this award is my God now!”

Griffin later explained that she meant this remark not as a slight on Jesus, but rather as a satire of celebrities who thank Jesus profusely and nonsensically for their awards, especially artists who themselves are controversial in their speech and actions.

The Catholic League urged the academy to “denounce Griffin’s obscene and blasphemous comment.”The Academy said that her “offensive remarks will not be part of the E! telecast on Saturday night”. Griffin later responded, “Am I the only Catholic left with a sense of humor?” Fox News commentator Bill O’Reilly called Griffin a “pinhead” for her remark, which Griffin considered a “badge of honor.

Griffin was widely criticized for a photo she posted on Instagram of her holding a model of the bloody, decapitated head of Donald Trump. She was dropped by Squatty Potty as a result of her post.

She however gave a public apology on social media for the photo, saying that she went too far and adding, “I beg for your forgiveness.”

On May 31, 2017, CNN fired her from its New Year’s Eve broadcast and  said in a statement prior to announcing her termination,

“We found what she did disgusting and offensive.

We are pleased to see she has apologized and asked that the photos be taken down.” CNN news anchor Anderson Cooper also condemned the photo saying, “For the record, I am appalled by the photo shoot Kathy Griffin took part in. It is clearly disgusting and completely inappropriate.