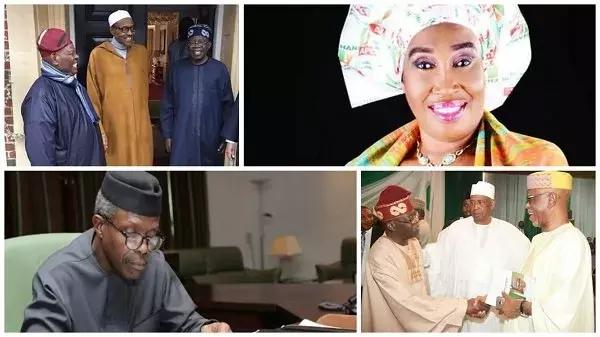 A former presidential aspirant, Princess Hadiza Ibrahim, says some cabal were doing everything to remove Vice President, Prof. Yemi Osinbajo from office ahead of 2019 general elections.

She made the assertion while appealing to Osinbajo, now Acting President, not to resign under any circumstance.

Hadiza noted that if Osinbajo resigns, he would be betraying the confidence Nigerians reposed in his joint mandate with President Muhammdu Buhari.

She told Daily Sun, “In fairness, I also believe in Osinbajo. For the little time that Buhari was away on medical vacation recently, Osinbajo tried his best for this country. The value of naira appreciated. I am sure with time again, the value of naira will be on a higher side and dollar will be on a lower side.”

She said Nigerians should note that the mandate they gave to Buhari, “is not just for Buhari; it is a joint mandate for Buhari and Osinbajo.

“Vividly, by the analysis probably done by me, if Buhari and somebody else and not Osinbajo had contested the presidential election in 2015, Buhari might not have come to power.

I believe Osinbajo is a God sent man. He is a pastor and I see him as a prophet too because is so simple.

“I am sure God wants to use Osinbajo to rectify this country. So, I believe in Buhari/Osinbajo joint mandate.

I want to give Osinbajo this advice that under no circumstance because of our vote and the trust we put in the his joint ticket with Buhari, he should not resign.

The votes that brought them to power were for Buhari and Osinbajo. He should not disappoint us.

“I cast my vote because it is Buhari/Osinbajo.

The vote is a debt on them. So, they should have the fear of God.

So, Osinbajo should not resign, no matter what. The cabal should have the fear of God.

“Osinbajo should not be afraid of any threat from anywhere.

Nobody is above God. Since he is a man of God, he should stand by God. He should not be forced to resign and he should not resign on his own.

He should continue to hold the mandate for President Buhari. When the Buhari gets well, he should handover to him. But in the absence of Buhari, he should not be forced to resign.”

Asked about the likelihood that the perceived cabal might want to use the National Assembly to impeach Osinbajo, Hadiza said, “Why would the National Assembly impeach Osinbajo? For what offence? I Hadiza Ibrahim will not agree to that. I am crying out now. The change we asked for is reality. It is change for progress, and a change to move the country forward. It is not a change for different things.

“I believe in Buhari and Osinbajo joint mandate. I am crying now because I don’t understand where things are going to in Nigeria now. The cabal may ask him to resign, let me use this medium to tell him, he should not.

“Osinbajo has a mandate because we voted for Buhari and him. The mandate will last till May 29, 2019. So, he should not be coerced to resign so that he would not betray the confidence we have in him.”

A statement issued by Fani-Kayode read, “The only thing that is relevant is the interpretation that the Service Chiefs and the military place on the “National Coordinator” letter that was sent to the Senate.

“They will act on that interpetation if Buhari dies and they are urged to do so by the corpsocrats. That is the game plan.

“It is not by accident that every single security agency in Nigeria today is headed by a northern Muslim except for the Navy. And now for the first time since 1999, a northern Muslim has been appointed GOC of the all powerful and critical 1st Division which covers the north west.”