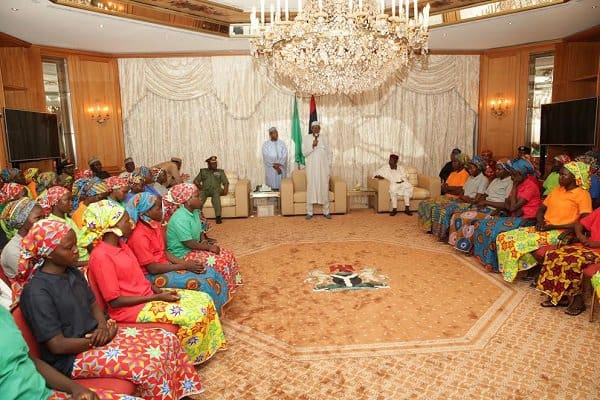 Naija News learnt that just one cameraman from the Nigerian Television Authority (NTA) Bayo Omoboriowo, the president’s personal photographer, were allowed into the residence, alongside some foreign journalists.

Service chiefs and many top government officials were also given access to the meeting.

This is the first time that many accredited state house correspondents would be prevented from covering a reception for released Chibok girls.

The two buses which conveyed the girls to the president’s residence arrived the place at 7:06pm.‎

But correspondents, who had been at the entrance of the place for over four hours were prevented from seeing the faces of the girls led by Aisha Alhassan, minister of women affairs.

The 82 schoolgirls had earlier been taken to a facility in the Department of State Security (DSS) at the presidential villa for a series of medical checkups.

They were received by ‎Abba Kyari,  the chief of staff to the president.

The girls were swapped with some Boko Haram suspects.