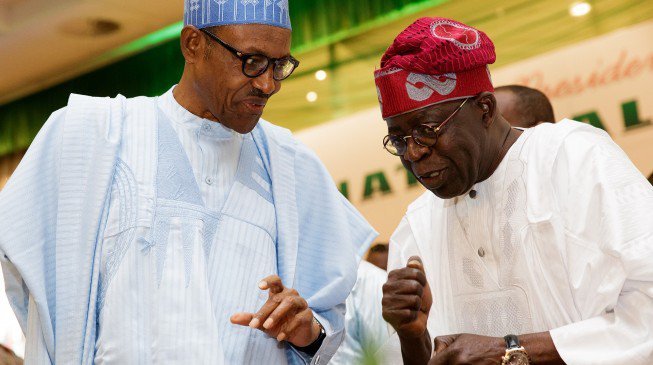 Bola Tinubu, a chieftain of the All Progressives Congress (APC), says writing a book on how his party defeated an incumbent president Goodluck Jonathan.

Former President Goodluck Jonathan who was defeated President Muhammadu Buhari who was candidate of the APC in the 2015 election.

Tinubu has been hailed for the role he played in helping the ruling party form government at the centre.

Speaking at the launch of ‘Against the Run of Play’, a book by Olusegun Adeniyi, a renowned journalist, Tinubu said he will soon tell the story of how he moulded APC to end the 16-year reign of the Peoples Democratic Party (PDP).

Tunde Rahman, Tinubu’s media aide, represented him at the programme.

“Some have said that they will tell their story, Asiwaju is also working on his own book to tell his account of what transpired,” Rahman said.

“To tell how he was able to mould the APC to the extent that it was able to unseat an incumbent president for the first time in the history of our contemporary politics.”

He also said his loss of the vice-presidential seat could not be compared to the achievements of Vice-President Yemi Osinbajo.

Tinubu added that he made a good choice nominating Osinbajo as the running mate to Buhari.

On Thursday, newspapers, which had advanced copies of Adeniyi’s book, had reported how Tinubu, one of those featured in the book, accused Senate President Bukola Saraki and Nasir el-Rufai, governor of Kaduna state, of working against his emergence as Buhari’s running mate.

But Rahman said his principal was quoted out of context in some reports.

“The account of what transpired as told by Bola Ahmed Tinubu in the book and as presented in some newspapers is not about him losing the vice-presidency and the eventual vice-president emerging, as the reviewer has put it,” he said.

“I’d like to say that even the vice-president has said on some occasions that a certain political leader from the south-west nominated him for the job and we all know who that is.

“That nomination has been a very good choice from all the wonderful things the vice-president has been doing.”