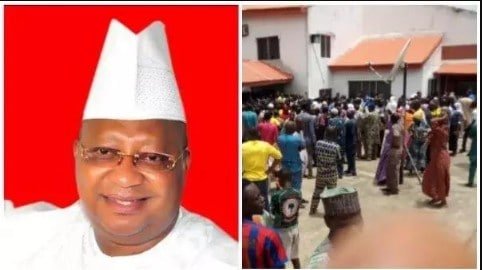 Naija News learnt that Adeleke’s remain was  dressed like a living being and brought in seated in a Sienna car.

Sympathizers trooped in to catch a picture of their political leader and benefactor. Mourners including the youths and aged ones were seen wailing and rolling on the ground as they rain curses on those who they claimed poisoned him.

Some of those who entered into the living room said the corpse was being bathed now in preparation for the burial.

Some imams are sighted at the premises which indicated that he would be buried very soon.

The senator was last seen at a function in Iwo, Osun state where he looked hale and hearty without any sign that he was sick.

Watch video of sympathizers at Isiaka Adeleke’s residence in Ede: