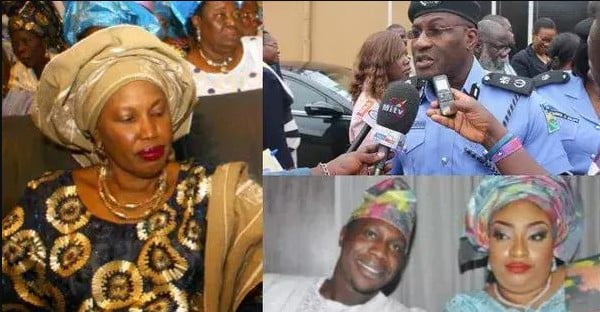 Wife of Former President Olusegun Obasanjo, Mrs Taiwo Obasanjo who recently filed a court case to postpone her son’s wedding has raised alarm over plans to assasinate her.

Mrs Obasanjo further stated the trio have perfected plans to get the police to arrest and detain her on trump up charges between May 10 to 14, 2017 when the wedding is scheduled to take place.

The petition reads: ” I was reliably informed that the three person mentioned above have perfected their plans to assassinate me because I requested the court to shift the wedding date of my son from the month of May to June 2017.

“They also have a plan to start smear campaign on my person using various media platforms such as newspaper, internet etc..

“Their third plan is to frame me up on false charges and get me arrested and detained by the police from the 10th -14th May, 2017 and also to involve the military police to achieve their plans.

“Sir, this issue reported here is neither a small matter nor a figment of my imagination because sometime during the time of late Head of State , Gen. Abacha, when Daddy Obasanjo was in prison, the late Stella Obasanjo got the military to detain me at DMI Apapa by Frank Omenka on false charges

“Sir, what is unfolding now is not a wedding preparation but a desperate attempt to kill me because I told Rosemary Dacosta and her daughter Tope Adebutu to allow the wedding to hold after the month of May 2017.

“Chief Kenny Martins is the leader of the planned assassination on my life. Sir, I am reporting this issue so that you can please use your good office to step in to the situation because there is a deep strange desperation attached to the wedding of my son which is now do or die wedding ceremony for them.”

When contacted, Chief Martins declined to comment on the petition, saying he was not aware of any petition by anybody against him.

“I don’t have any petition from the police on my table so I don’t react to what is not before me,” he said.

Ms Dacosta also refused to comment on petition, saying she is not interested in whatever anybody has said or saying about her.

“I don’t wanted to listen to anybody. I have no say on what is happening because I don’t know anybody. Thank you so much and bye bye,”

Miss Adebutu did not pick her calls when contacted.‎