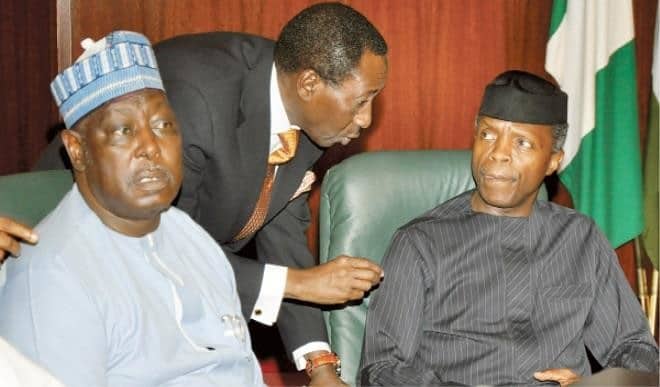 President Muhammadu Buhari has set up a committee to resolve the conflict between him and the legislature.

The committee is headed by Vice President Yemi Osinbajo and it included all ministers who were former senators.

Other members are the Senior Special Assistants to the President on National Assembly Matters, Ita Enang (Senate) and Samaila Kawu (House of Representatives).

Members of the committee met at the vice president’s office after the cabinet meeting.

Minister of Information and Culture, Lai Mohammed, told reporters that the cabinet expressed concern over the strained relationship between the executive and the Senate in particular.

He said: “The executive is also concerned that the relationship between the two arms of government is not as smooth as it is supposed to be.

“In any democracy, it is a continuous struggle for balancing between the executive and the legislature because each of them is a creature of the law.

“We must strive at all times to ensure that there is that balance, amity and smooth relationship.

“Just today (Wednesday) at the Federal Executive Council meeting, the issue was discussed and a committee is already working on ensuring that we resolve all these outstanding issues,” the minister said.

It took the decision to protest continued presence in office of the acting chairman of the Economic and Financial Crimes Commission, Ibrahim Magu, even though his nomination was rejected twice by the senate.

The upper chamber had also expressed displeasure at the refusal by the Comptroller-General of the Nigeria Customs Service, Hameed Ali, to wear uniform.

The Senate had earlier this year called for the removal of the Secretary to the Government of the Federation, Babachir Lawal, following allegation of misappropriation of funds meant for the Internally Displaced Persons (IDPs) camps in the northeast.

BREAKING: Ali Ndume suspended by Senate, over Saraki and Dino