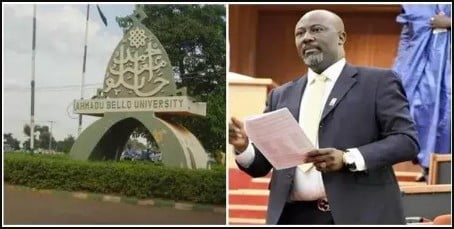 A statement reportedly released by the Dean of Students, Ahmadu Bello University, ABU Zaria, Bar. Ahmed Tanimu has confirmed that Senator Dino Melaye is a bonifide graduate of the institution.

Vanguard reports that the yet to be confirmed statement, however circulating in the social media and is claimed to be from the Dean of Students, Ahmadu Bello University, ABU Zaria, Bar. Ahmed Tanimu.

The said statement claimed to be from the varsity don was alleged to have confirmed that Senator Dino Melaye is a “bonifide graduate of ABU Zaria who has his genuine transcript and certificate.”

The statement, if found to be true, could be a reprieve to Senator Dino Melaye who has been embroiled in certificate scandal since Sahara Reporters, an online media platform, published report that the lawmaker never graduated from Ahmadu Bello University, Zaria, where he attended his first degree course.

The Senate ethics and privileges was on Tuesday, March 21, during plenary was directed to investigate the claim that Melaye does not possess an authentic first degree certificate from the Ahmadu Bello University, Zaria.

NaijaNews.com also reported on Thursday that Dino Melaye had filed a libel suit against Sahara Reporters

However, according to the confirmation making the rounds on social media, the institution has said “Dino is a graduate of ABU Zaria.

See the full statement below allegedly from the institution, confirming Melaye’s status as a graduate of ABU Zaria.

“Dino is a graduate of ABU Zaria. I do not like him but the campaign of calumny and falsehood against him must stop. I recalled a meeting with the then VC, chief security officer Mallam Ashiru.”

“At the meeting it was resolved that all politically exposed students and unionist must be graduated for peace to reign in ABU.

“The VC started by asking me, the then SECGEN ABUSUG, when am I supposed to graduate? I told him I was only in 4 hundred level law then, he then asked after so many other commrades like Anslem, Chris, Ochums, Arokoyo, Ribadu, Renshaw, Kamal, Ntom, SB, Bright, Ganzi, Kombitel, Realman, Kurfi, Kabir Mustspha, Tijani Kabir (refused to graduate and 8 years later became NANS president), Precious Abdul, MB Mustspha, Dino etc……he gave a marching order that the Dean student affairs must ensure that our types are promptly graduated and leave the school in peace and in good time. Referring to all the so called elders and Unionist of ABU then.”

The case of Elder Dino as he then was, was even the worst. In truism, Dino never wanted to graduate from ABU. He was benefiting handsomely and almost feeding from Unionism like many Unionist, he deliberately kept having carry-overs so as to remain in ABU against the orders of the VC.

Trust the smart VC Mahdi, he ensured that Dino swiftly passed all his carry-overs. When Dino resisted that move by the VC, he was told by the Dean that the University has the power to pass and graduate any of it’s students if they are satisfied that such a student has attained sufficient learning or good character standing(whether he actually pass all his papers or not).”

“In Dino’s case, the emphasis was placed on his good character and not necessarily the waived passing.”

I repeat, Dino is a bonifide graduate of ABU Zaria, Department of Geography and Faculty of Social Science. He has his genuine transcript and certificate. He might have been exempted from NYSC as he was an adult even when in school.”

Meanwhile, earlier today, Melaye shared a picture of himself during his National Youth Service Corps in a bid to convince Nigerians that he attended and graduated from the Ahmadu Bello University.