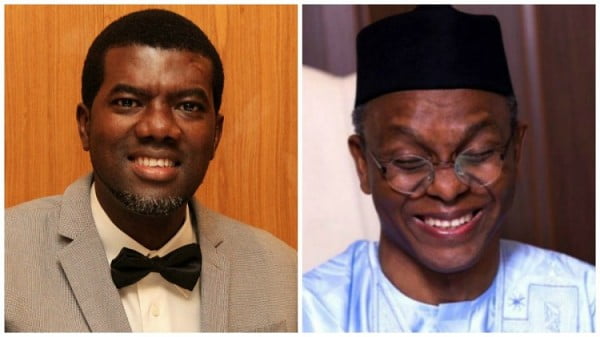 Governor El-Rufai had in a letter to President Muhmmadu Buhari, said the ruling All Progressives Congress (APC) failed on its campaign promises to Nigerians.

The letter, sent to the president in September 2016, only surfaced in the public domain yesterday (Thursday).

While reacting to the letter, Omokri described El-Rufai as an unrepentant “backbiter” and a perpetual “backstabber”.

“The mouth that Nasir El-Rufai used to bite Atiku Abubakar, then Olusegun Obasanjo then Umar Yar’Adua then Goodluck Jonathan has now been used to bite President Buhari!,” Omokri wrote on his Facebook page.

“A backbiter must always bite and a backstabber must always stab! President Muhammadu Buhari should go and buy former President Obasanjo’s book, My Watch, to read what he said about El-Rufai. Obasanjo Said “I recognised his weaknesses; the worst being his inability to be loyal to anybody or any issue consistently for long, but only to Nasir el-Rufai.” Did Obasanjo lie? You be the judge!

“A man who cannot govern his state believes he can advise a man who does not know how to govern a nation.

“Do you see why we are where we are? Parts of Kaduna are like a war zone. The state has not achieved any feat economically.

“The governor is in a power tussle with Shehu Sani, a Senator from the state. Kaduna citizens complain about lopsided appointments at the state level. Yet, this busybody leaves all of that to teach the President his business. He cannot carry a rat yet he wants to carry an elephant!,” he said.