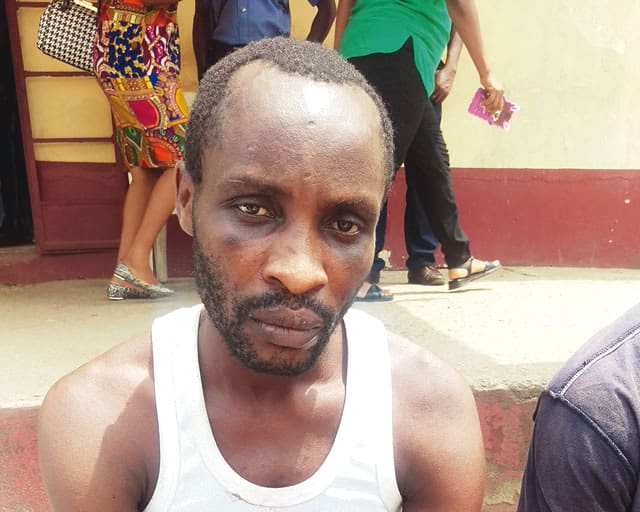 A 35-year-old man, Sunday Ushie, is currently in police net for killing his girlfriend, identified as Nnena Samuel, and having sex with the corpse.

Ushie, a cocoa farmer in Akparabong, said the deceased never gave him the opportunity to have sex with her while alive.

He said that he invited her to his house and killed her with a knife before having sex with her corpse.

The farmer, who said he regretted his action, blamed the incident on the devil.

He said, “It is the work of the devil. I do not know how it happened. I am the one that killed her. She was my girlfriend and I knew her for two months before this incident. I slept with her corpse after killing her.

“It was strange sleeping with a corpse. I never had sex with her while she was alive because she never gave me that opportunity. I was always giving her money, but she didn’t allow us to have sex.”

PUNCH Metro learnt that the suspect had invited the mother of two out in the evening of January 26, 2017, and took her to his apartment. He was said to have killed the woman when she refused to allow him to have sex with her.

The acting Commissioner of Police in Cross River State, Mr. Hafiz Inuwa, who paraded the suspect along with other criminals, said the landlord of the deceased informed the police that “his tenant had been brutally murdered.”

He said, “This suspect was arrested on January 27, 2017, at about 10.55pm, following a report at the Ikom Police Division by one Cletus Etta of Adijinkpor village that his tenant was brutally murdered.

“Her right hand and left leg and mouth were severed by the suspect. The children of the deceased – Hezekiah (11) and Ezekiel (9) – told the police that their mother was taken out by the suspect on the night of January 26, but did not return home.

“The suspect has been arrested in connection with the crime and he has confessed that he killed the woman before having sex with her. Investigation is ongoing, after which he will be charged to court for murder.”