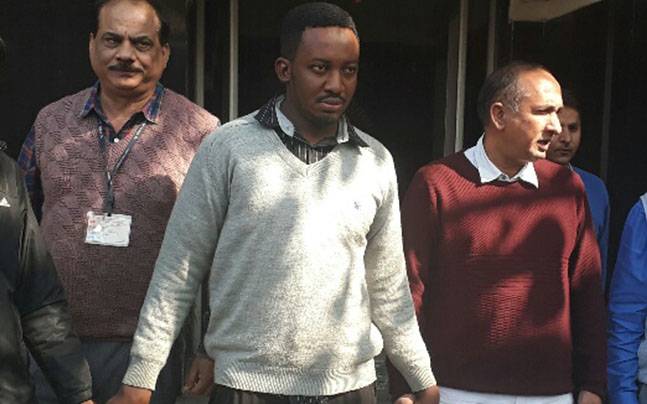 A Nigerian identified as Monday Tony Okonkwo has been arrested by the India’s Narcotics Control Bureau (NCB) for trafficking 1.3 kilograms of fine quality Colombian cocaine stashed in 90 capsules.

Okonkwo who had come to Delhi from Lome, Togo and arrived IGI airport in an Ethiopian Airlines plane on February 6. was taken to hospital where an X-ray confirmed the presence of foreign bodies in his stomach.

He was kept in the hospital for two days during which he expelled 90 capsules containing 1.3kg cocaine.

Monday Tony Okonkwo: arrested in Delhi
“When we conducted a thorough search of his body and baggage, he denied having any drugs or banned substance with him. However, the NCB team got suspicious when he said that he had come to India regarding his business of wigs and hair, but was found travelling on a tourist visa,” said Rajender Pal Singh, deputy director general, NCB.

Tony was taken to Safdarjung hospital where an X-ray confirmed the presence of foreign bodies in his stomach.

During interrogation, the man revealed that he had ingested the drug capsules at a guesthouse in Lagos.

“The accused said he took around three hours to ingest the capsules and then took a flight to Lome.

He then travelled to Addis Ababa from where he boarded a flight to New Delhi. His passport has corroborated the claims,” Singh said.

Monday Tony Okonkwo was supposed to deliver the drugs to another distributor who would have contacted him once his Indian number was active.
“We are on the lookout for his handlers based in India and Nigeria,” Singh added.

NCB believes the cartel is being run by a group based in Peru or Bolivia and is the same one that had employed a Brazilian woman earlier to carry the contraband in swallowed packs.

The consignments were first taken to Sao Paolo, Brazil and then distributed throughout west African countries through carriers. The drug was brought to India via Ethiopia or Abu Dhabi.
Watch the video: