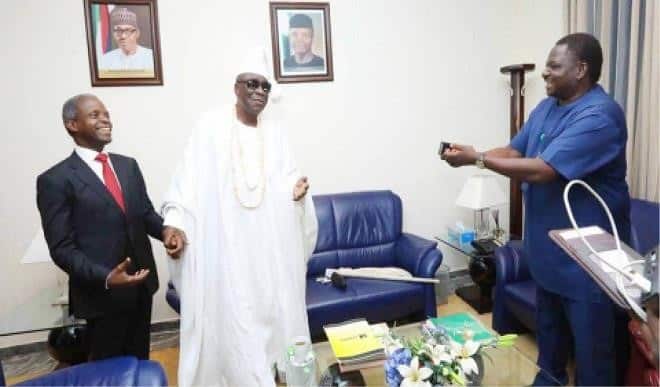 From left: Acting President Yemi Osinbajo, Oba of Lagos Rilwan Akiolu and the Special Adviser to the President on Media Mr Femi Adesina, during the monarch’s visit to the Presidential Villa in Abuja yesterday

The oba of Lagos,Rilwan Akiolu on Thursday visited Acting President Yemi Osinbajo at the presidential villa in Abuja.

Addressing state house correspondents after a meeting with Osinbajo, the monarch said he decided to use the opportunity created by the postponement of a security meeting, which he was supposed to attend, to visit his former lecturer.

The acting president was a lecturer in the faculty of law of the University of Lagos, and Akiolu is an alumnus of the institution.

“I am a traditional ruler and I am a servant of the people, I am here to see the acting president,” he said.

“We had a meeting here, I was invited by the senate and the house of representatives on Tuesday, we were supposed to have another security meeting tomorrow (Friday).

“But unfortunately, it was cancelled and I decided to spend that time to see my former law lecturer to wish him well and once more to convey to him the wishes and prayers of Lagos state people.

“That, by the Grace of God, the Almighty Allah, our president will return to us hale and hearty.

“And all will be well with us in this country, provided all of us are sincere to cooperate with the government and tell the government what we feel: constructively and not destructive criticism that is all.

“Absolutely, patience and useful suggestions will move the country forward.”

“By the grace of God, our president will be back to all of us,” he said.

Akiolu said he told the acting president that God blessed him more than he expected.

“He is very quiet, easy going and always with his Bible; see what God has done for him,” he said.

“He was not interested in any political base but God has destined that he will be the number two man.

“All of us should pray for the two of them and for Nigeria to be very successful, provided we are patient, close to God and absolutely honest in what we are doing.

“All will be well with us.”