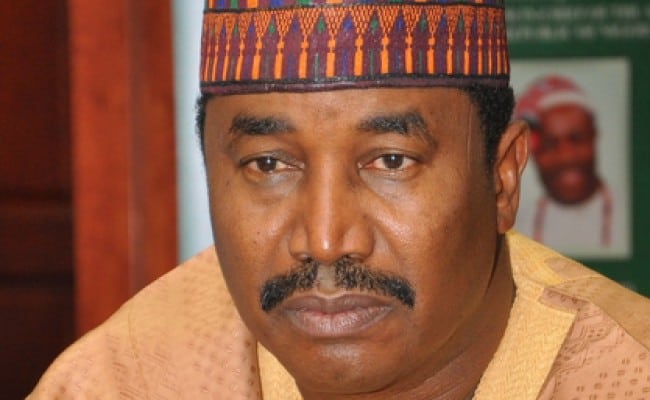 Embattled former governor of Katsina State, Ibrahim Shehu Shema could not hold back his tears at the premises of the state High Court, following his re-arrest by officials of the Economic and Financial Crimes Commission (EFCC).

Recall that the court had during its sitting on January 10, 2017, slated yesterday to hear arguments of Shema’s lead counsel, Joseph Daudu (SAN) and EFCC counsel, Jibril Samuel Okutepa, over its competence to entertain the commission’s decision to arraign Shema before it.

Shema is being charged alongside three others, Sani Hamisu Makana, Lawal Ahmad Safana and Ibrahim Lawal Dankaba before Justice Maikaita Bako of the Katsina State High Court ‎for the alleged offences of criminal breach of trust, abuse of office and conversion of public funds to the tune of over N11bn during his tenure as governor.

It was gathered that while the anti-graft agency insisted yesterday that the court has jurisdiction, Daudu said Shema ought to have been arraigned before a Federal High Court and not a state High Court.

However, mild drama ensued in the court room as Daudu came back and asked the Justice Ibrahim Maikaita Bello to protect his client because there was a move by the EFCC to arrest Shema.

However, apparently determined to pick up Shema, EFCC officials blocked the former governor’s black Lexus sports utility vehicle, a development which led to a face-off between security operatives and Shema’s legal counsels and aides which lasted over 40 minutes at the gate of the court on Daura Road.

The Sun reports that when it became obvious he could not evade the arrest, Shema broke down in tears and reportedly begged the EFCC officials to allow him ride in his vehicle.

During the court’s sitting of January 10, the EFCC had urged the court to order the remand of Shema in prison custody but the judge ruled that he could not give such order since the charges had not been formally read in court and Shema’s plea taken.

Reacting to the reported arrest yesterday, Shema’s media spokesman, Wale Oluwabusola, said EFCC did not arrest Shema but noted that he could not say precisely where his boss was taken to.

“Shema was not arrested but, I can tell you that the government of Katsina State is trying to use security agents to harass and intimidate the former governor”, he said.

The court, however, fixed February 21 to rule on the matter and asked Shema to report on the next adjourned date.