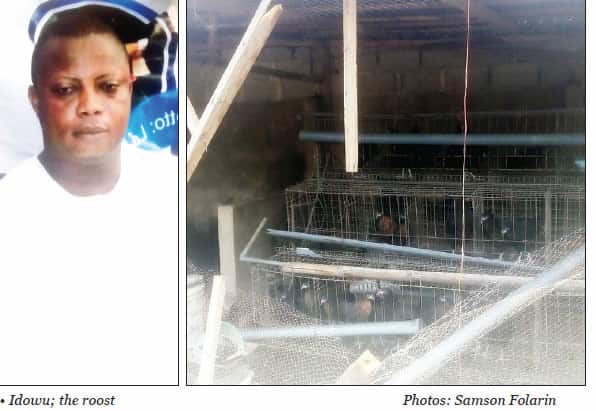 The owner of the chickens which led to a fight and death of a chartered accountant, Idowu Solaja, has alleged that the deceased was the first to attack Segun Irehin and his wife, Sola.

According to punch the witness, Clement, said that 51-year-old Solaja had, on the day of the incident, spoken to him first before heading for the home of the suspects.

Naija News has earlier reported that Segun and his wife, Sola, had last Monday attacked Solaja, over a chicken roost owned by them in the Ikorodu area of Lagos State.

Solaja, who owned a house beside the Irehins, had allegedly complained to the couple that his family was being disturbed by the fowls, which led to a fight.

He allegedly died from the injuries he sustained after being beaten by the couple.

Punch learnt that Segun was an elder with the Jehovah Witnesses.

Clement, who claimed to be a primary witness, said 57-year-old Segun had equally sustained injuries, adding that Solaja, not Segun, was the aggressor.

He said, “I am the owner of the chickens. I bought them sometime in December, 2016 and I discovered that they were dying one-by-one. So, I decided to sell them off.

“I was passing by the road when I saw the pastor’s (Segun) roost. I approached and asked him to allow me to keep the chickens in his roost. He told me that he would have loved to buy the chickens, but he didn’t have the money. He said I could keep them in his roost, but I would be coming twice a day to clean up the surroundings.

“Last Monday when this incident happened, I was cleaning the roost when I saw the man (Solaja) and he asked if I owned the chickens and I answered in the affirmative. He asked who gave me the permission to keep the chickens there and I told him it was pastor (Segun). He asked if he was around and I said yes.

“He went to the door of the house and started shouting. I didn’t say anything because I didn’t know who he was.

“It was mummy (Sola) that came out first. There was a lot of noise. As mummy was trying to respond, daddy (Segun) came out and accused him (Solaja) of harassing the family. As they were arguing, he hit daddy and punched him. Both of them fell and he continued punching him. Daddy was holding his clothes and could not retaliate because he is an old man.”

Clement said at that point, he decided to intervene and separate the fight.

Clement, who claimed to be a gospel artiste, said he believed there had been “hatred and envy” between the two families.

He said while Segun went into the house to clean his blood, Solaja headed for the station on the advice of some residents.

He explained that when Segun also wanted to go to the police station, the victim’s wife held him back “so that her husband would be the first to reach the station.”

Clement lamented that he had yet to return to the house to check his chickens which might have died from hunger.

A relative of the suspects, who did not want to be identified, said the Irehins had been living in the area for over nine years, adding that they had been in the poultry business before changing to piggery.

He claimed that Idowu and his wife moved into the area last year and complained about the piggery.

He said, “Last year September, he relocated the pigs to where they eventually died due to bad environment.

“After the fight over the chickens, the man went to the police station and said he wanted the matter charged to court. I went to get a lawyer to bail Segun out around 2pm.

“Around 9pm, a police officer told me the deceased said he was no longer interested in taking the matter to court.

“Around 11pm, I saw a policeman in my house and he said Idowu (Solaja) had died. By that time, the couple had gone to church and I had to call them to explain the development. They came and were subsequently arrested.

“The deceased had an issue with his health and he didn’t think about that before coming to fight. He always moved around with an inhaler; he was asthmatic.”

The wife of the deceased, however, denied that her husband had asthma, adding that it was only an excuse by the suspects’ family.

She said, “My husband did not have any asthma. It is a lie. They are only trying to make excuses. Also, I held the man because he wanted to run away.”