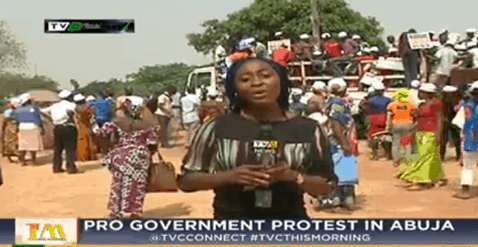 There are strong indications that the #istandwithbuhari is not genuine but a paid protest, according to a TVC news correspondent, some of the protesters were promised a N1000.

Here is the report according to TVC News Correspondent Dooshima:

Pro Government Protest In Abuja.
Live from Abuja, two factions of protests. TVC News Correspondent Dooshima Abu gives us update of the protest.
Dooshima says people came out en-mass both young and old not minding the scorching sun saying this Government has done well . According to her says some of the protesters supporting the Government when asked why they came out to protest say they don’t have an idea why or what they are doing there but are waiting to be paid N1,000 as promised by the mobilizer.
Meanwhile there is another faction not too far off who are against the Government #TVCThisMorning