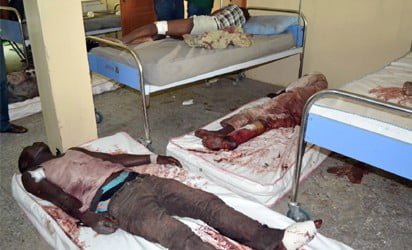 Attackers believed to be Boko Haram members have killed unknown number of people and injured several others in an ambush on motorists in Borno state on Saturday, January 28.

The report quotes a driver Mallam Aliyu Yau as claiming that he managed to escape with some of his passengers but several others were not so lucky.

He said: “Most of the passengers killed and injured were not by Boko Haram sect, but by military escorts who opened fire on fleeing passengers into the bush, mistaking them as escaping terrorists.

“It is unfortunate that our road is not safe today (Saturday morning) as some Boko Haram terrorists laid ambush on the road. It is regrettable that during the ambush and exchange of gunfire between military escorts and the terrorists, many passengers took to their heels into the bush, and most of them fell victim in the cross fire..

“I cannot ascertain the number of those killed as I managed to escape with my passengers. But I learnt that scores of people were killed or injured.”

The Borno State Police Command has yet to confirm the attack neither have military authorities issued any statement on the attack.