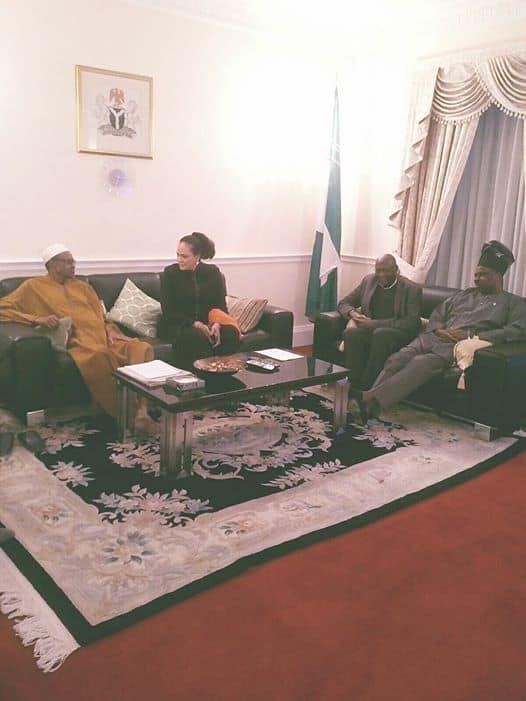 President Muhammdu Buhari has finally released a picture of his vacation in the United Kindgom to prove He is alive.

President Buhari pictured having a chat with Aisha Alubankudi and Governor Ibikunle Amosun.

The photo was posted today, Friday, January 27 evening by a Facebook user Aishat Alubankudi on her page after a meeting with Nigeria’s number one citizen.

She wrote a short statement to accompany the picture which also showed Ogun state governor Ibikunle Amosun, a close ally of the president’s, sitting relaxed in a chair across from the commander-in-chief.

Alubankudi is a Nigerian socialite and blogger based in the UK and a close ally of President Muhammadu Buhari.

She also posted a short comment to accompany the photo she released in which she asked for God’s forgiveness for all those saying the president had died.

She wrote: “Photo of PMB today. May Allah forgive those who claimed that he was on life support machine at Kings College Hospital. Baba dariji won nitori won o mo oun ti won nse (someone translate).”

This is the second picture evidence that the president is indeed alive and well in the last three days after presidency released a picture of the President watching Channels TV’s Sunday Politics night show on Monday, January 23..

Recall that rumours of President Buhari’s alleged dead began at the weekend but the presidency was quick to quash it with a statement from the president’s spokesman Garba Shehu.

The disturbing report has first been broken by an alleged fake Metro (UK) site that “quoted” the Nigerian mission in the country as confirming the president’s death.

The report alledged that Buhari visited the UK for medical check over an unknown disease.