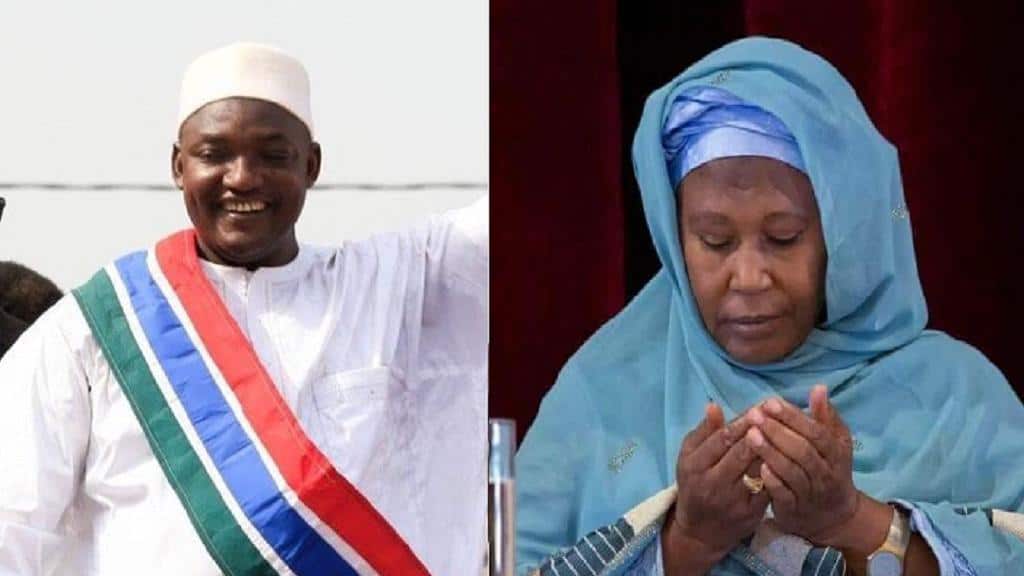 President of The Gambia, Adama Barrow, has appointed a woman as his Vice President, local media in the country have reported.

Presidential spokesperson Halifa Sallah, disclosed that the rest of Barrow’s cabinet will be unveiled later on Tuesday, January 24, after the new president returns to Bangul, the country’s capital city.

By The Gambian Constitution, Ms. Tambajang is not eligible to be the Vice President, given that she does not fulfill the qualifications required for a vice president, which is stipulated under section 62(1)(b) of the 1997 constitution.

The 1997 Constitution, which is the supreme law of the land states that the minimum age of thirty and a maximum age of 65 is required for one to become a Vice president, thereby disqualifying Ms. Tambajang’s prospects of becoming a Vice President.

Fatoumatta Tambajang was born on the 22nd of October 1948. She is a senior politician, a former minister and United Nations Development Programme staffer.

She was the architect of an opposition coalition that helped Adama Barrow defeat longtime ruler, Yahya Jammeh in a December 1 presidential election.

Last month, she made headlines when she said that Jammeh, who came to power in a 1994 coup, would be prosecuted for alleged crimes committed by his regime.

Following her comments, Jammeh, who had initially conceded defeat, announced he no longer recognized the result, triggering a protracted political crisis which ended when he flew into Equatorial Guinea on exile late on Saturday.

Adama Barrow, who fled to Senegal earlier this month for security reasons, was sworn in as president on January 19 at The Gambia’s embassy in Dakar.

On Sunday, a Barrow aide accused Jammeh of plundering millions of dollars from the state coffers in his final weeks in power before flying to Equatorial Guinea.

The new government disclosed that The Gambia is in financial distress given that over 500 million dalasi ($11 million) were withdrawn by Jammeh, over two weeks. Jammeh also reportedly fled into exile with his luxury cars which he piled onto a Chadian cargo plane.
In addition to the accusations surrounding Jammeh’s wealth, rights groups say sections of the security services under the ex-ruler’s personal control have been accused of carrying out extrajudicial killings, torture and arbitrary detention during his rule.

Jammeh, who ruled the small West African country for 22 years, had refused to concede defeat in a December 1 election but eventually relinquished power after a delegation of West African leaders convinced him to step down, even as troops from neighbouring countries entered The Gambia.

Jammeh’s departure followed two days of negotiations led by Guinea President, Alpha Conde and Mohamed Ould Abdel Aziz of Mauritania, prompting speculation over what, if any, terms were agreed upon to convince him to step down.

On Sunday, hundreds of Banjul residents cheered a military force by ECOWAS, the West African regional bloc (which includes troops from Nigeria, Ghana and Mali, and Senegal) as it entered the capital to provide security and allow newly elected president, Adama Barrow, who has been in neighbouring Senegal for more than a week, to return and take power.

Cheering and singing, some sought to capture the moment for posterity, posing for photos with the Senegalese troops.

President Adama Barrow says he plans to establish a commission to investigate alleged human rights abuses by Jammeh’s regime, but denies that the former ruler had been offered immunity from prosecution in exchange for leaving the country.

The President’s spokesman says a truth and reconciliation committee is Barrow’s “preferred method” of dealing with grievances against the previous government, but many Gambians take the harder line of his new vice president.

Critics have raised concerns over the wording of a statement issued by the United Nations, ECOWAS and the African Union that seemed to offer Jammeh comfortable guarantees for his future.

The statement said “No legislative measures” would be taken that would infringe the “dignity, security, safety and rights” of Jammeh or his family, noting that property “lawfully” belonging to him would not be seized.

The declaration also said Jammeh’s exile was “temporary” and that he reserved the right to return to the Gambia at the time of his choosing.

By implication, the agreement essentially says there can be no prosecution against Jammeh, his family or his entourage; there will be no seizure of his assets, no witch-hunts, and he can be back to the country at any time.