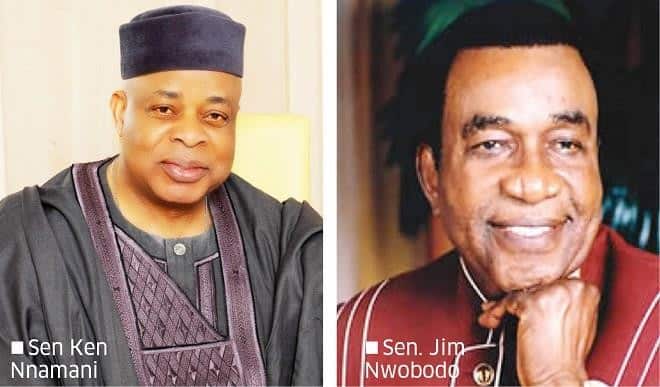 The two, who were registered at their Amechi ward, Enugu South Local Government Area of  the state in the ongoing registration and re-validation of members in the South-East, said their exit from the PDP would deal a deadly blow on the party.

Senator Nnamani, who was registering in the party for the first time, said their exit would be an end of the road for the PDP in the zone.

Former Senate President, Nnamani, however,  said he was not forced by anybody to join the APC, stressing that he opted to do so according to his conscience.

Nnamani, who currently heads the National Electoral Reform Committee, said as long as God gives him strength, he would continue to identify with winners.

His words: “In politics of our nation, if you read in between the lines, you will not ask anybody who has finished buying something from the market to buy something for you. He is tired, he will not buy anything.

“You must identify with somebody going to the market. I will not waste my money to invest in a group of people who have finished buying. As God gives me strength, I will identify with potential winners. If that makes me opportunist, so be it.

“APC is not perfect, but we will join hands in making it perfect. I am playing according to my conscience. Many people will criticize me, saying I left a party that helped to make me. I quit PDP on February 6 last year and went on sabbatical. By February 6 this year, it will be one year that I left PDP. I must not remain partyless.  I have decided to join APC. Nobody forced me. It is my decision. I will tell my supporters why I joined APC at the appropriate time. If a song is going on, if the rhythm changes, you change your steps.

After his re-registration, Nwobodo said for the country to move on the right direction, the South East zone must be given its due in the nation, pointing out that the country was standing on a political tripod of North, West and East.

Nwobodo, who was a former governor of old Anambra State lamented that he got nothing in the 17 years he was in the PDP, saying that even when he had helped in installing some people in positions, his own finished soon after the elections.

He said he has long standing relationship with President Muhammadu Buhari and had urged him to continue to run for the presidential elections even after his third attempt.

He, therefore, called on the party members in Enugu State to stop all bickering and ill-feelings and join hands to move the party forward.

Nwobodo, who said he was re-registering having registered in the past with his wife, urged the people not to mind what was happening now in the country.

, saying that things would change for the better.