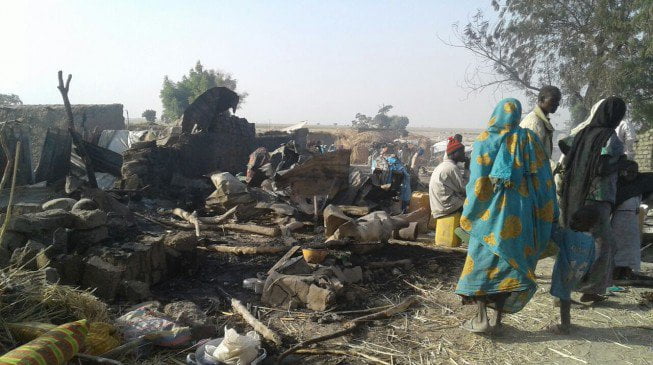 Alfred Davies, a field coordinator with Doctors Without Borders/Médecins Sans Frontières, says he saw broken bones, torn flesh and bodies of children that had been cut into two after a Nigeria air force fighter jet “mistakenly” dropped bombs on an internally displaced persons (IDPs) camp in Rann, Borno state.

On Tuesday, after the incident occurred, Rabe Abubakar, military spokesman, said they got intelligence of a gathering of Boko Haram insurgents but it turned out to locals in Rann.

“We received reports about gathering of Boko Haram terrorists somewhere in Kala Balge local government area of Borno state. We got a coordinate and I directed that the air should go to address the problem,” Abubakar said.

“Unfortunately the strike was conducted but it turned out that the locals somewhere in Rann were affected.”

But speaking with TIME, Davies said in an hour they counted 52 persons dead.

He said MSF’s distribution of relief materials such as mats and blankets saved a lot of people because they were queuing up at their tents at the time of their attack.

He explained that they were in Rann to “evaluate people’s nutritional status and assess their needs, including if they had access to enough safe water.”

The coordinator said after months of trying to gain access to Rann, they finally got there on January 14 and found that the people living in Rann had “nothing.”

“The first bomb fell at 12:30 p.m. and landed just a few meters away from the Red Cross office. The plane circled back around, and it dropped a second bomb five minutes later,” Davies said.

“Dozens of wounded began to pour in, and the flow of people continued for hours. There are no words to describe the chaos. Some people had broken bones and torn flesh; their intestines hung down to the floor. I saw the bodies of children that had been cut in two.

“The tents were strewn with wounded, and there was barely any room to move. Many people were outside, lying on mats under the trees. There was only one doctor and one nurse in our team, but each of us did what we could. Even the drivers helped us. We also had support from the Red Cross staff and military nurses.

“I did not see the plane, and I don’t know exactly what type of bomb it was. We found small metal slivers on the bodies. What I saw was indescribable. In the space of one hour, we counted 52 dead.”

He said that at the burial ground, over 30 new graves were dug and filled up with mothers and their children in most of them.

“I also visited the area where the bombs hit. They had been dropped on houses. It’s incomprehensible. I recognised the body of a mother who had been at the MSF distribution that morning,” Davies said.

“I can’t find the words. What allows us to carry on after this terrible and traumatising experience is knowing that we did everything we could despite not having enough resources.

“What the survivors of the bombing have lived through is so hard, so violent. Rann was their safe haven. The army that was meant to protect them bombed them instead. We have to remain at their side.”