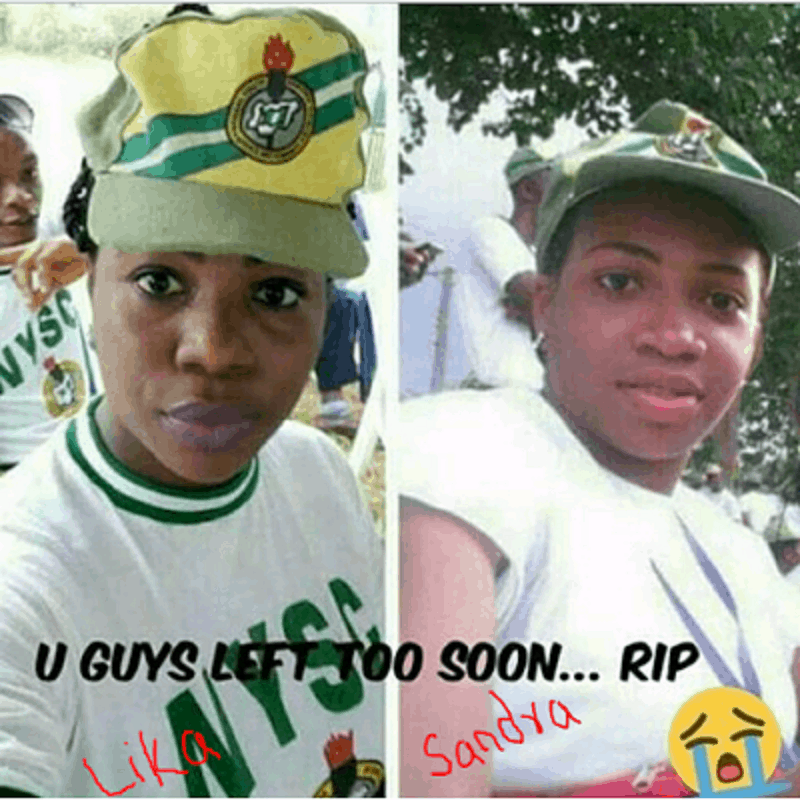 In addition to the spate of lives lost recently during the compulsory one year National Youth Service Scheme, NYSC two female corp members serving in Akwa Ibom state have lost their lives in a road accident.

The deceased corps members identified as 21-year-old Chidinma Sandra Ewelike and Lika’s untimely demise occurred while they were on their way to use the ATM from Etinan to Uyo.

The duo were in a tricycle popularly known as keke NAPEP, alongside other passengers when the unfortunate incident occurred.

In a tribute to the deceased on Facebook, Sandra’s friend, Chukwukadibia disclosed that Sandra was an only daughter and a graduate of Micheal Okpara University of Agriculture, Umudike. Read the emotional tribute;

“Chimma, ever since we met on the day of my matric, u became my friend & my sister. While on earth, u were my role model. With your good behaviour,charming smile, burning desire to serve God, ur humility and kind nature,u were able to maintain good relationship with everybody who came in contact with you.

Dede and I visited u on the 22nd of Dec 2016 during ur short break from NYSC, and u were full of life. It’s really painful to believe u are gone.

We spoke on the 3rd Jan 2017 and u told me on phone that u have gone back to Akwa-Ibom to complete ur NYSC.
Is this d completion of your NYSC?

When Chief called by 4am, informing us of your sudden demise, i really did not believe the terrible news until i got to your home.

I saw how people gathered in silence with hands folded. Chief was weeping for his only daughter, i saw how grief tore Lolo apart. Obinna and Dozie were speechless.

I gazed at your picture, what came to my mind was “Enyia isi ebee?” as u would always ask me weneva u see me.
Now, i am asking you “Enyia ebee ka i hapuru anyi gawa?”

Chief said u survived the accident that claimed the lives of the other 4 persons who were in the same keke with u. U were still unconcious even when he drove all the way from Umuahia to Akwa-Ibom, u did not give up. U hung on even wen all the govt hospitals they took you to were on strike. U struggled with death from 2pm to 12 am,until you finally……..

I know we have lost a rare gem bt i will not shed tears for someone who had gone to be with the Lord. I pray God to give us the fortitude to bear this irraplaceable loss.

You lived a very short but a fulfilled life and since it is the will of God to call back home, we shall not question him maka na Chineke wetara, Chineke ewerekwala, mana #Ozo_emekwala.