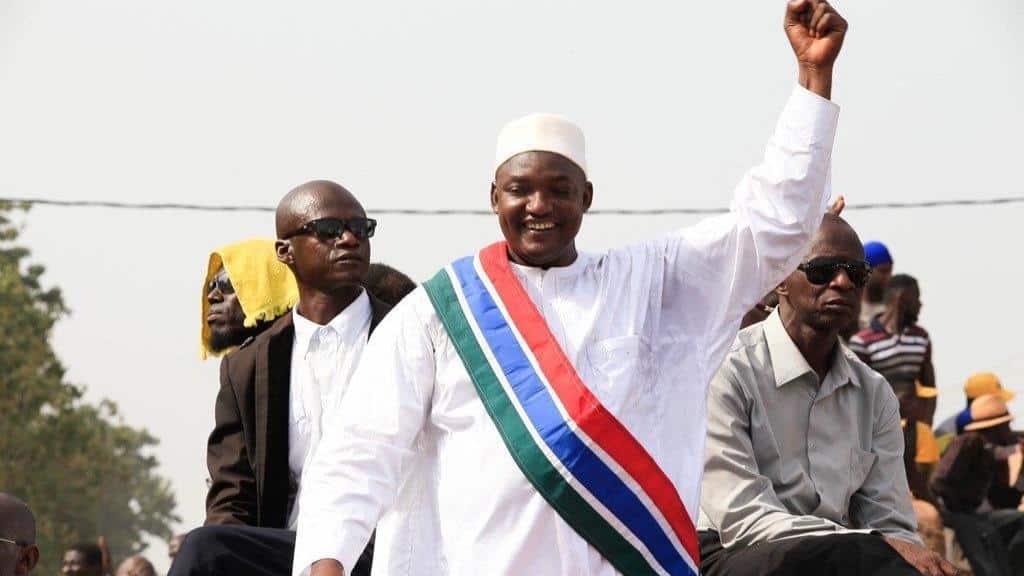 Adama Barrow, Gambia’s president-elect is due to be sworn in on Thursday January 19, 2017 but it is becoming increasingly clear that the event may not come on.

Gambia is currently under a 3 month (90 day) state of emergency imposed by President Yahya Jammeh after a legislative vote to that effect.

But Foreign Affairs Minister of Nigeria, Geoffery Onyeama, has hinted that the ceremony could go ahead outside of the country but on Gambian territory.

‘‘An embassy is a territory of a particular country that that embassy represents. The constitution provides for a swearing-in by a judge of a superior court and there are a number of those that are available,’‘ Onyeama told RFI English service.

We made history on the first day of December. Our future starts tomorrow. #Gambia pic.twitter.com/kSxUcROONJ

He is however quick to add that a swearing in has not be scheduled outside of the Gambia. But that if it happens Barrow ‘‘will be recognized as the legitimate president of The Gambia,’‘ adding that it would not just be symbolic nor will it amount in interference in the affairs of a sovereign nation.

Jammeh has held two meetings with a regional mediation bloc led by Nigerian president Muhammadu Buhari but the intervention ended inconclusively as Jammeh insists that he would stay in charge till a poll petition his party filed in court is dealt with.

The Gambian Supreme Court has been unable to sit on major cases brought by Jammeh’s party due to the lack of judges to sit on the case. Aside the poll petition Jammeh tried to halt the investiture of barrow but the court again refused to rule.

Jammeh is on record to have slammed the Economic Community of West African States (ECOWAS) for declaring that they will do all it takes to enforce the outcome of the December 1 elections, a position he said was ‘a declaration of war,’ adding that he was ready to defend the Gambian constitution.

Barrow who is currently in Senegal after attending a security summit is expected to takeover from Jammeh. His party spokesman, Halifa Sallah is on record as saying the swearing-in will take place on Gambian soil.

“It is clear that President Jammeh currently has armed men. At the time of the investiture, on the 18th at midnight, these persons shall take an oath of fidelity to the republic and to the new person to be invested.

They must not follow his orders. Anyone who agrees to follow a president whose term has expired will be a rebel,” he said.