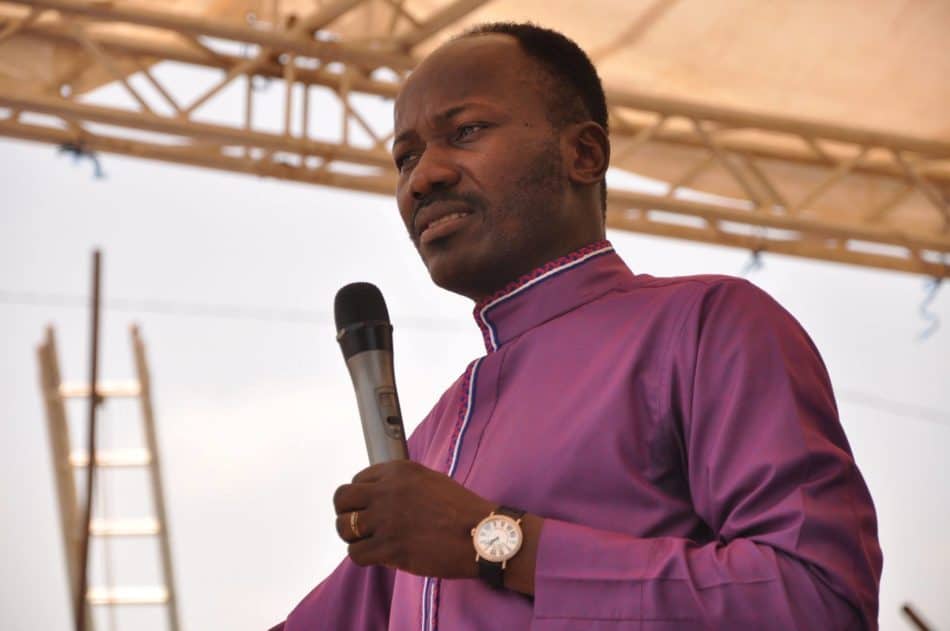 Pastor Joseph Aiyedun, a pastor with a Nigerian branch of Omega Fire Ministries Worldwide has been expelled from the church for participating in MMM.

According to a statement signed by the head of admin at OFM, Pastor David Apelorioye, Pastor Joseph Aiyedun, was fired for participating in the Mavrodi Mondial Movement (MMM).

Pastor Aiyedun was in charge of one the branches of OFM in Aba, Abia State.

Founder of OFM, Apostle Johnson Suleman, had referred to MMM, a popular ponzi scheme, to be demonic.

In November 2016,  Apostle Johnson Suleman, had during a church service called it “demonic”, warning members of his congregation against participating in MMM.

The church released a statement on the matter saying:

“The management of Omega Fire Ministries Worldwide is using this medium to react to a news making the rounds on the social media regarding one of its pastors who used the ministry’s name to register for the MMM scheme.

“Ordinarily, the church would not have reacted to the story because of falsehoods being published regularly by some blogs and news websites whose credibility are questionable.

“But after a thorough investigation by the church authority, it was established that one of our branch pastors in Aba, Pastor Joseph Aiyedun, indeed participated in the scheme.”

The statement also revealed that following a thorough investigation, the erring pastor was sacked after it was discovered that he used the name of the church to register for MMM.

Thereby bringing shame to the ministry’s image in the eye of the public.

Reports also say that the erring pastor would have merely been disciplined in line with the church rules if he had registered for the scheme in his personal capacity.

However, since he used the ministry’s name for the scheme, he was sacked.

Church Pastor Sacked For Using Church Account To Do MMM

“The church authority decided to expel Pastor Aiyedun not because he registered for the Ponzi scheme but because he involved the ministry’s name in the satanic adventure.

“And we discovered that he was able to use the ministry’s name because he had access to the account of his branch.

“Which itself is against the church’s guidelines and a fraud likely to have been carried out in connivance with the branch’s account department.

“We are still investigating further to unravel the whole activities.”

“The statement therefore, appeals to the general public to disregard any news being passed around about Omega Fire Ministries involving in the MMM scheme or any scheme of its kind because it is not true.

“Of the OFM’s 200 churches in Nigeria alone and its 800 branches in 51 nations of the world, it is possible for any of the pastors to go astray and be corrected.

“In fact, we discovered that Pastor Aiyedun, including some other members of OFM, did the scheme before our father, Apostle Johnson Suleman made the warning last year against MMM.

“But Pastor Aiyedun was fired because he did it with the ministry’s name as the OFM rules forbid any of its pastors access to the account except people in the account department.”

According to reports, the sacked church pastor was paid a full one year salary to enable him look after his family whilst he searches for other things to do in life.

Apostle Suleman, however, was not available to comment on the matter.