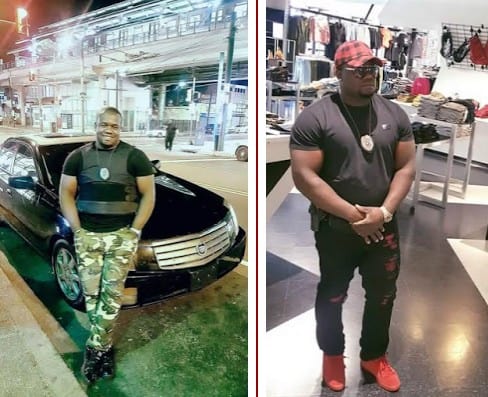 An American Army Veteran Chuks Okebata assassinated in ‘broad day light days after returning to Nigeria from the states.
According to the tip we got from a source who claims to be cousins with the late Chuks,

‘my Cousin Chuks Okebata, A USA Veteran, who has spent most part of his life working and defending the United States of America. After a very long time living in the USA, and because of the love he has for his country Nigeria and his home town (Umuduruorie Umuomumu Mbieri in Mbaitoli LGA) he started building a house at home as a bond that make him to be frequenting his mother land. Just as he returned last Xmas to spend his vacation in Nigeria and also to move into his new home. At Exactly 5pm on the 12th of Jan 2017, some gun men abducted and shot him’.

Shocking Video of Late Chuks Okebata Wife Before His Assasination

New videos have just surfaced online, showing the tense relationship between late Nigerian-born US Army Veteran Chuks Okebata and his wife, before he was shot dead during his visit to Nigeria in December 2016.

Ever since a video emerged on Facebook showing late Chuks Okebata and his wife engaged in a war of words after which she called the cops on him, people have been accusing Chuks’ wife of having a hand in his death.

Chuks’ wife has reacted to the damaging videos making the rounds by telling her side of the story. According to her, she called the cops on her husband for her own safety because Chuks constantly subjected her to physical abuse.

Read her story as told to Amanda Chisom below;

“My own side of the story

Amanda , I once came to you about my husband and his incessant abuse and cheating. Yes I am the wife of the man who was assassinated, and I am just distraught. I do not even know where to start but it is only right I tell my own side of the story. I am innocent, God is my witness that I did not kill my husband or the evil that my husband’s family is portraying me to be, yes my sister in-law posted that video to make me look evil but the part she did not tell anybody was that I was calling the police to save me because he always beat me up and I was told to call the police whenever he started and that was exactly what I was doing, from the video you would see that I did not fight him or answered him. Should I have allowed him to kill me?

Amanda, we have been married for 13 years since I was 19, it has been beating upon beating, I have gone through surgeries because of beating he gave me. How can I kill my husband, we live together, till the day he left for Nigeria, I packed his things , how could I kill him. Who do I know to order a hit on the father of my children? I have no interest in his properties as suggested after all we built every thing together. God knows I am innocent. He went to Nigeria and was going to club spraying dollars and showing off, revealing his locations . They want to pin my husband’s death on me, my husband was not assassinated. He was kidnapped, because he is a military man he is always with a gun and when he shot to death one of thekidnappers,they shot him. Why is my family leaving out information about what happened and pinning it on me?

I never threatened him to kill him, I am a working woman with a paying job and have no reason to kill him because of properties . All I just want is peace to mourn and raise my children. You can confirm my story from those people in my home town. My husband was careless in a country with high rate of crime and was kidnapped, if he had not shot one of the robbers all we would have been talking about is paying ransom not death. Amanda why would I kill the father of my kids, why would I choose his death over a divorce if things were that bad. I have two boys, who will help me raise them? I am completely innocent of all the allegations. I have endured all this years through his beating and cheating and I did not leave or kill him, why would I do it now? All I ask is that I am left to mourn in peace and the killers found and prosecuted.

I love my husband and I’m still in tears

I’m mourning him and people are accusing them wrongly.My children are crying daily.”

In another Facebook post, Amanda Chisom confirmed that the widow of Chuks Okebata indeed shared evidence with her last year that her husband was cheating on her openly and also abused her physically. In one, Chuks admitted to cheating on his wife and said he looked outside because he was never satisfied by his wife at home.