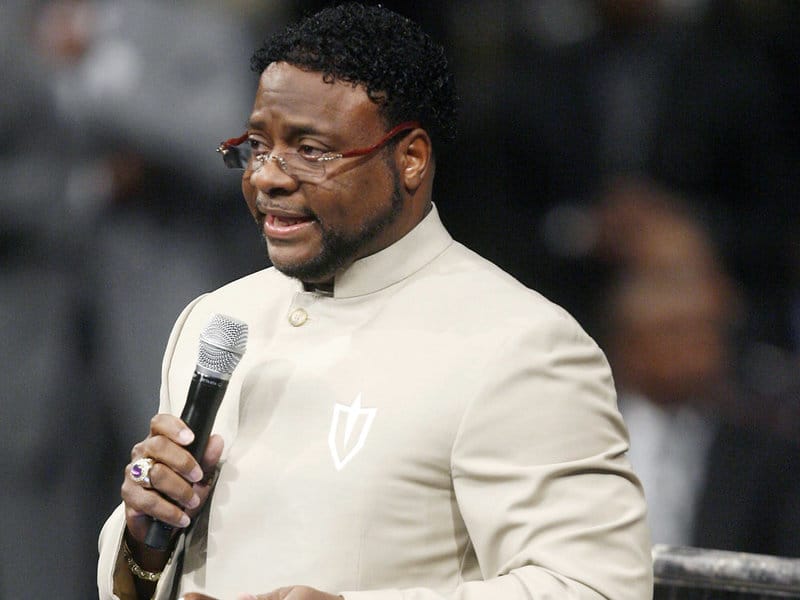 Bishop Eddie Long, the controversial megachurch leader who fell from grace after he was accused of sexually coercing four young male congregants, has died. He was 63.

Long’s death was confirmed in a statement by the New Birth Missionary Baptist Church and reported by multiple news outlets.

According to the statement, Long died on Sunday, “after a gallant private fight with an aggressive form of cancer.”

He reportedly made his last public appearance just two weeks ago as seen in a photo on Twitter, a shiny bald head replacing what was once thick hair.

“I am recovering from a health challenge that I trust God to deliver me from. It is unrelated to the eating for life diet consisting of mostly raw vegetables that I am continuing, as part of a holistic approach to good health.”

“Bishop Long’s ministry, although, it did a lot of good – let me be very clear when I say that there were a lot of moments of positive ministry moments where lives were changed in terms of social-economic standing – but the way in which that ministry took place was an emphasis on personal piety, holiness and not much the prophetic witness against injustices in the broader society.

Long was born May 12, 1953 in Huntersville, N.C., to the Rev. Floyd M. Long, Jr. and Hattie Long. He received a bachelor’s degree from North Carolina Central University in Durham, N.C, in 1977 and in 1987 became senior pastor of the Lithonia, Georgia-based New Birth Missionary Baptist Church. There, he’s credited for growing the 300-plus congregation, or to put it in Biblical terms “where two’s and three’s were gathered” to some 25,000 making it one of the nation’s largest megachurches.

According to The Associated Press, the church operated television and international ministries, with satellite churches in Miami, Denver, and Charlotte, N.C.

It was at Long’s church that the funeral of Coretta Scott King, the widow of the Rev. Martin Luther King Jr. was held, drawing mourners such as then-President George W. Bush and former Presidents Bill Clinton, Jimmy Carter and George H.W. Bush.

“Long was a Christian author, a gospel singer and was also known for preaching and practicing a “prosperity gospel” in which the faithful would be rewarded with wealth.

“Long was also known for his flamboyant lifestyle, as he flew around the world on a private jet, drove metro Atlanta in a $350,000 Bentley and live in a $1.4 million house with six bedrooms and nine bathrooms.”

But arguably, the biggest headline Long made was when in 2010, four young men who were members at his church filed civil lawsuits accusing him of sexual misconduct. Long had denied the allegations, citing, he’d only been their mentor.

No criminal charges were filed and the lawsuits were settled out of court for undisclosed terms.

No funeral arrangements have been announced.