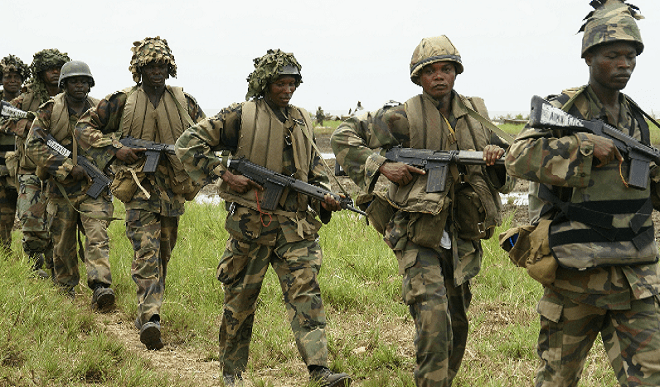 The Nigerian Army on Sunday revealed that its troop killed 13 Boko Haram terrorists during clearance operations in Bomboshe and Sinbaya in Dikwa Local Government Area of Borno.

Brig.-Gen. Sani Usman, the Director of Army Public Relations, said in a statement in Maiduguri that the operations were carried out on Thursday and Friday.

According to him, the troops also discovered and destroyed the insurgents’ night market at Boboshe and neutralised five terrorists.

“The Army troop also rescued 58 persons comprising 35 women and 23 children held in captive by the terrorists.

“During the operations, the troops met stiff resistance from suspected terrorists, eight of whom were neutralised around Sinbaya.

“As part of the clearance operations of remnants and fleeing Boko Haram terrorists in the North East, troops have continually carried out raids, patrols and cordon operations.

“It is in that regards that troops of 112 Task Force Battalion, 22 Brigade, Nigerian Army on Operation Lafiya Dole, conducted joint operations with vigilantes and civilian JTF in suspected terrorists hide outs.

“In the last two days, the troops have carried out patrols and clearance operations in various villages and towns in Dikwa Local Government Area.

“On Thursday, Jan. 13, with the assistance of some local vigilantes and civilian JTF, the troops carried out fighting patrols and clearance operations in Awada and Sinbaya villages.

“Yesterday (Saturday), they also carried out a joint patrol to Agulari, Kirinari, Gubdori and Yale villages, including Talwari village, which served as harbour for the terrorists.

“Although the terrorists have abandoned the locations, the troops observed traces of their activities such as hoisted Boko Haram flags in the area.

“The patrol recovered one Toyota truck at Kajeri and arrested one Boko Haram terrorist in Boskoro village.

“However, one soldier sustained injury during the operation and is receiving medical attention,’’ the statement stated.

Usman reminded members of the public to always pass information on suspicious persons in their environment to security agencies. (NAN)