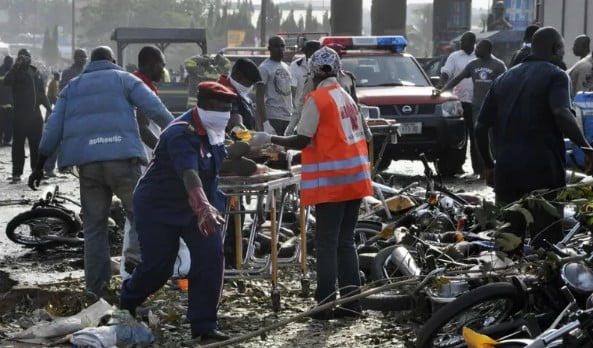 After being dislodged from their base in Sambisa forest in Borno state, the Boko Haram terrorist group have reportedly gone on rampage in the Madagali area of Adamawa state with multiple explosions.

The three explosions reportedly happened at a crowded motor park

Daily Trust reports that three bombs exploded in Madagali town in the northern part of Adamawa state, with many currently dead.

The report quoted witnesses as saying the three explosions occurred in the morning of Friday, January 13 at a crowded motor park on the outskirt of the town.

Though the casualty figure has not been formally revealed, security agents and rescue workers are said to be evacuating the dead from the scene.

The report also quoted a local official as confirming the incident and saying details of the attack were not clear yet.

The report said the spokesperson of the 28 Task Force Battalion in Mubi, Major Bakare Akintoye could not be reached.

The report said the spokesperson of the 28 Task Force Battalion in Mubi, Major Bakare Akintoye could not be reached.

Vanguard also reports a witness simply called Baba as saying one of the blasts happened close to a checkpoint at the entrance of the town.

He said: “We heard three blasts near the checkpoint where people gathered to be screened before entering the town as you know today is market day.

“The bombers blew themselves up alongside the two vigilante members that approached them.”

In his reaction, the member representing Madagali/Michika federal constituency at the House of Representatives, Hon Adamu Kamale, but could not actually confirm if there were casualties.

“Information available to me showed that there was no death in the blast, except that some people sustained injuries,” Kamale said while calling for more deployment of troops to the Madagali axis of Sambisa which he said was still habouring insurgents.

Alhaji Yusuf Mohammed, the chairman of Madagali local government, while confirming the incident, added that he could not give details as he was not around.

“I was outside the town for an official engagement but I was called and informed about the incident. That is all I can tell you for now,” Mohammed said.