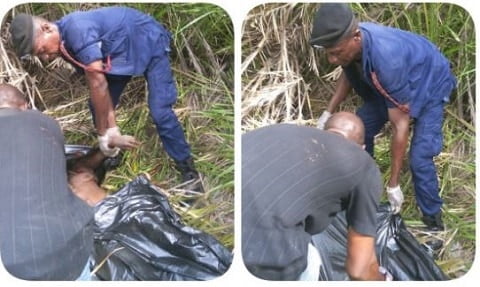 A  32-year-old man named Kisseh Adowah, has been arrested for allegedly beheading his 60-year-old lover.

Adowah had reportedly killed and cut off the head of late Korkor Sarah Mormorbi Wormenor, at a village near Kasseh, Ada District, Greater Accra Region.

According to the deceased’s family, late Korkor had told them she was going to visit Adowah in his house around 10:30pm, but never returned after. They sent out a search party when she failed to return the next day, and when they didn’t find her, they alerted the Accra police.

After further search, her headless body was found in a nearby bush, where she been dumped by her lover.

Confirming the incident, the Ada District Police Commander, Supt. Faustina Agyeiwaa Koduah Andoh-Kwofie, said the body was found without the head, and has been sent to the Accra police hospital for an autopsy. He said: ”We could not find the head so we are sending the body to the Police hospital.”

Adowah’s father said his son actions may be due to health-related issues, as he had suffered high fever about two years ago, and that he had once attacked him during an argument.