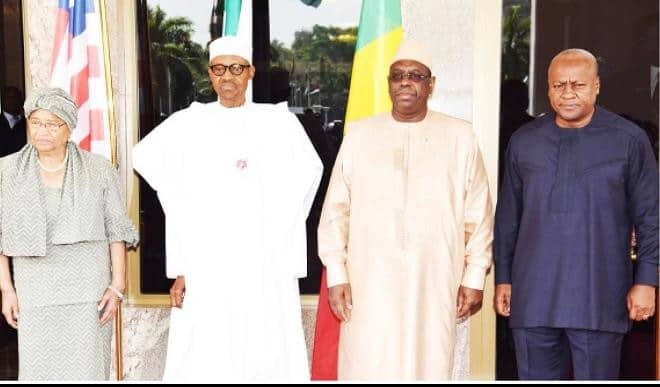 Leaders of West African countries yesterday in Abuja resolved  that embattled President of The Gambia, Yahya Jammeh must quit power having lost  election in December, 2016.

From left: ECOWAS Chairperson, President Ellen Sirleaf-Johnson of Liberia, President Muhammadu Buhari, President Macky Salle of Senegal and former President John Mahama of Ghana, before a meeting on the Gambian situation at the Presidential Villa in Abuja yesterday

After a meeting at the Aso Rock Presidential Villa they insist that the political crisis in Gambia must be resolved in a manner that conforms to the constitution of the country and respect for the will of its people.

The leaders also emphasised the need for Jammeh to respect the constitution of the country.

Jammeh who had accepted defeat in last month’s presidential election, later reneged on his concession and vowed to cling   to power.

Briefing State House correspondents after the meeting, Nigerian Foreign Affairs Minister Geoffrey Onyeama said: “The leaders agreed on the determination to resolve the crisis in a manner that every step of the way conforms to the constitution of The Gambia and respect for the will of the people of The Gambia.”

The minister stated that the ECOWAS leaders particularly expressed concern over the reported deteriorating security situation in The Gambia, especially the closure of   media houses in The Gambia including radio stations.

He said the leaders also frowned upon arrests “that have been taking place and also the refugee situation that is being created with the mass exodus of a large number of people to the interior and to neighbouring countries.”

The minister said in view of this development, the ECOWAS leaders resolved to meet Jammeh in The Gambia on Wednesday to discuss with him  the need   to respect the constitution of his country.

Speaking to our correspondent on the telephone last night, she said Nigerians living in The Gambia were concerned about the political impasse in that country and had been asking what the Nigerian government would do if the situation became volatile.

“Naturally, the Nigerian government will not abandon our citizens. But in case the situation becomes volatile, we will evacuate those who want to be evacuated.

“But we are hoping and confident that it will not get to that and that the matter will be resolved through the ongoing intervention of the ECOWAS leaders. The leaders will meet with President Yahya Jammeh on Wednesday,” she said.

Geoffrey Onyeama said the delegation to meet Jammeh tomorrow would comprise President Buhari as the mediator, Sirleaf, the president of Sierra-Leon and Mahama as the co-mediator, as well as the President of the ECOWAS commission, the Special Representatives of United Nations and also a Representative of the African Union. ECOWAS has mandated Buhari as mediator to offer Jammeh an “honourable exit.”  But he defied the leaders, saying he would not hand over.

Jammeh, who had vowed to rule the tiny West African country for “billion years,” rescinded a week after congratulating the President-elect, Mr Adama Barrow, and called for fresh vote, citing “abnormalities” in the electoral process.

He had filed a petition to challenge the result in Gambia’s Supreme Court, which is expected to hear the case today.  But reports say that the foreign judges from Sierra Leone and Nigeria will not be travelling to Banjul.

Marcel de Souza, the ECOWAS Commission president, had said that the body would  put standby forces on alert should Jammeh refuse to hand over.

De Souza was reported to have said that Senegalese troops would lead any military intervention “to restore the people’s wishes.”

Senegal has indicated that military action would be an absolute last resort.

“If he loves his people, he has to be able to negotiate an exit door calmly. If it doesn’t happen, the most radical means will be used,” De Souza said.

But in his New Year’s televised address to Gambians, Jammeh vowed to defend his country against any external aggression.

He said the decision of ECOWAS is totally illegal as it violates the principles of non-interference in the internal affairs of member states, which is an entrenched clause in the ECOWAS treaty.

The country’s real GDP growth is projected to reach 3.5% in 2017 and 4.5% in 2018, but the political impasse is already taking a huge toll on Gambia’s small economy that relies primarily on tourism and agriculture and is vulnerable to external shocks.

Meanwhile, Jammeh has sacked 12 ambassadors after they asked  him to step aside and allow opposition leader Barrow to take power, according to the country’s foreign ministry.

The Gambia’s ambassadors to China, Britain, Turkey, Senegal, and the United States, as well as the country’s permanent representative to the United Nations, were among those sacked after sending a letter asking Jammeh to leave in late December.