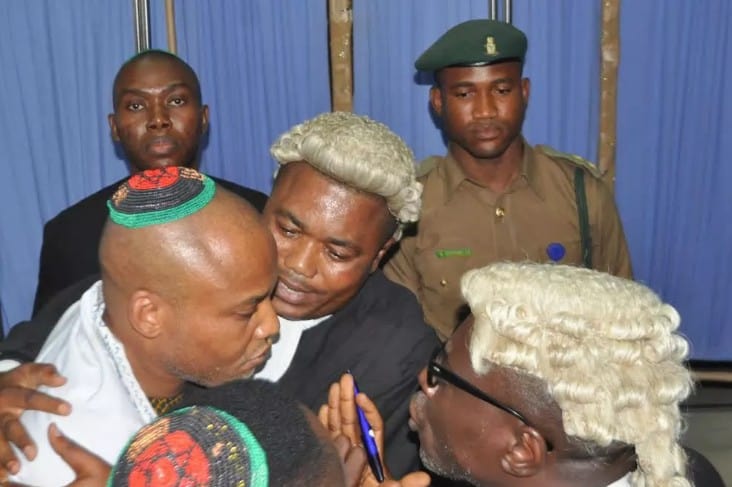 Visitors to the courtroom including journalists and security operatives were shielded behind a wall of fabric used to cover the lawyers, defendants, judges and witnesses.

Only one prison operative was shielded alongside others.

In the ongoing case, the Federal High Court seems to have contradicted itself in a ruling made on the trial of Nnamdi Kanu.

On December 14, the court had ruled that criminal trial against Kanu and three others – Benjamin Nwabugwu, David Nwawuisi and Chidibere Onwudiwe – commence today, January 10.

Justice Binta Nyako in her ruling said the witnesses that will be brought in by the Department of State Security to testify against the defendants will be protected.

See pictures of the wall of fabric used to conceal the identity of witnesses in the Kanu case below:Nyako had said: “The counsels and the defendants will see the witnesses. The witnesses will have special entrances to and outside the court.”

“It is not going to be a secret trial,” Nyako said.

She had also said the witnesses names will be protected and marked with alphabets.

However, contrary to its ruling on protecting the witnesses, the court during the trial shielded the defence and prosecution counsels, witnesses and the defendants from the public.

Meanwhile, before the trial commenced, a group of pro-Biafra protesters in Jewish garments had besieged the court, demanding that the trial of Kanu be in the open.

But security did not allow the protesters to enter the court – a situation which generated tension.