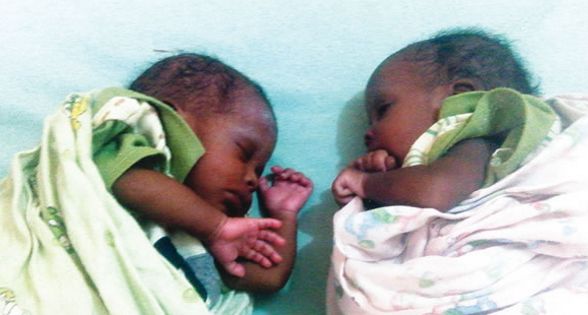 It was tears of joy for the Ademola family on Thursday as Nigerians from different parts of the country indicated interest in settling the medical bill of the newborn twins of the family.

The babies had been detained over the inability of the family to pay the remaining N150,000 of the N300,000 medical bill, after the father paid N150,000 and begged for time to pay the balance.

The mother, Sarah Ademola, had fled Felken Maternity Centre in Lagos, where she was delivered of the babies, due to the inability of her husband, Adeyemi Ademola, to pay the bill.
Adeyemi had told Punch that he was frustrated by the development, adding that he was making efforts to settle the bills.

He had lamented the financial difficulty of the family, saying those who owed him debts had refused to pay.

The matter was taken to Somolu Police Station, where the DPO planned to mediate.

However, after the report hit the tagstand on Thursday, many Nigerians indicated interest in settling the bills, as well as helping the family.

Among those who showed interest were the wife of the Lagos State Governor, Bolanle Ambode; a member of the Senate representing Lagos East, Senator Gbenga Asafa; a retired military officer, Gen. Oviemo Ovadje; and non-governmental organisations, among others.

Some other Nigerians outside the country were also said to have called the hospital to indicate willingness to pay the bill.

It was learnt that one of the NGOs that visited earlier on Thursday that eventually paid the money, just as Asafa gave the babies N100,000.

The matron of the hospital, Mrs. Gloria Akinbobola, said, “Immediately the report came out this morning, an NGO came and transferred the balance into our account. They also promised to give the family N50,000 to take care of the babies.

“They don’t want to be identified. We have received calls from many other people. A lot of them have been making promises.”

A representative of Senator Asafa, Kanmi Adebowale, said the N100,000 gift was for the upkeep of the girls, adding that the senator decided to support the family because they lived within his senatorial district.

When Punch reached out to the mother Sarah, she said, “I didn’t abandon my twins. I had to flee the maternity centre because I was not well taken care of.

“All they were interested in was their money. They said they would not attend to me until their N300,000 was complete. I was abandoned in the place… I had to run away to find solution to my health.

“I am in a place where they are treating me now. Please pray for me to survive. I am dying. I don’t want to die. I want to live to take care of my babies. I want to reap the fruit of my labour.”

Reacting, the husband said, “We are grateful to Nigerians. We have found the mother of the twins, but the problem is that she is terribly sick and has been taken to her hometown in Agbowa.”