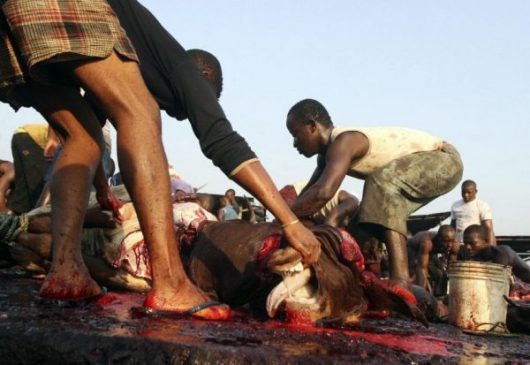 The Nigeria Security and Civil Defence Corps, Sokoto State Command says it has arrested two suspects, Nuru Sakaba and Magawata Gaski, for alleged attempt to sell the meat of a dead cow.

The Commandant of the corps in the state, Mr. Babangida Abdullahi, on Thursday said that the suspects were arrested around the Fakon-Idi area of Sokoto on Wednesday while butchering the dead cow.

He said the culprits attempted to sell the carcass to unsuspecting residents of the area.

He said, “We got intelligence reports about the nefarious acts of the alleged criminals; we swung into action and apprehended them.

“They have since pleaded guilty and they will soon be charged to court.”

The commandant said that the arrest of the suspects had prevented what would have constituted serious health hazard to the people.

“The consumption of such unwholesome meat is unhealthy and such nefarious act is illegal as well as anti-Islam.

“We are hereby urging the residents to continue to offer intelligence reports to the various security agencies to enable us nip crimes in the bud.”