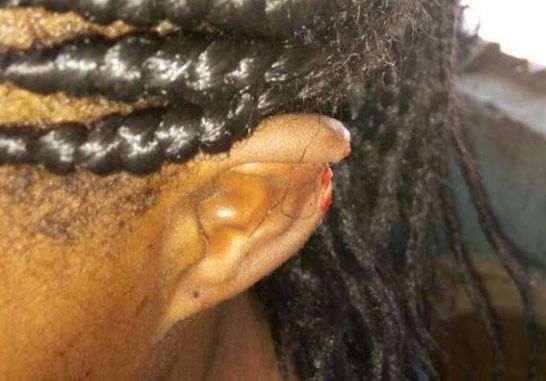 A woman identified only as Bor, has been arrested by the police in Kenya for biting off the ear lobe of her lover’s wife, identified as Grace Washeko and swallowing a piece of the ear during a heated argument.

Washeko, who is now in a hospital, confirmed to The Star that Bor, from the Voi area of Kenya, attacked her during a fight over her husband and in the process, bit off her ear.

Bor was said to have visited the mother of one at her workplace and engaged her in a fight over her husband, bit off her ear lobe and swallowed it.

Washeko narrated the incident, saying: “She laughed at me saying she had taken my husband away. I got angry and we began fighting. She bit my ear and swallowed the piece.

“I don’t know what is wrong with my husband because whenever he comes back, he complains that he is sexually starved and hungry. He acts very abnormally.
“His parents have asked him to end the relationship with the 40-year old woman but my 27-year old husband has refused to heed their call,” she said.

The injured wife said she has reported the incident to the police and waiting for them to get into action.

The Kandara Officer Commanding Police Division, OCPD, Gregory Mutiso, said investigation was ongoing and that the suspect who is on the run will be arrested soon.