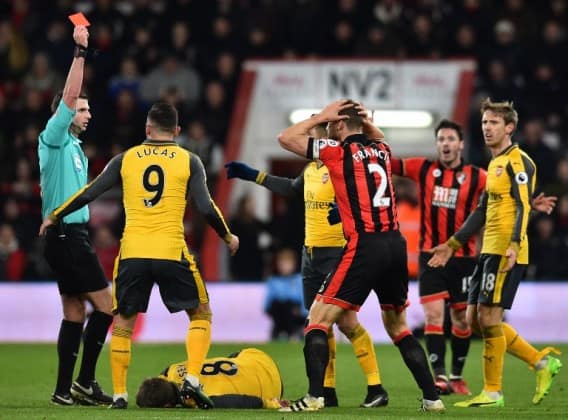 10-man Bournemouth survived a late scare to secure a point following a 3-3 draw against a sloppy Arsenal side in Tuesday’s Premier League week 20 fixture at the Vitality stadium.

Wenger made three changes to his team in a bid to freshen things up – the most notable seeing Shkodran Mustafi back to partner Laurent Koscielny at the heart of the defence.

Bournemouth were without Jack Wilshere due to the terms of his loan agreement with Arsenal, while former Gunner Benik Afobe was not in the squad despite scoring against Swansea at the weekend.

The game got off to a lively start, with both sides eager to get on the front foot and pass the ball around on a chilly night on the south coast.

Petr Cech was called into action during the early knockings to hold a powerful strike by Junior Stanislas, while the Cherries fans demanded a penalty moments later when the goalkeeper collided with Callum Wilson in the area.

But replays proved Michael Oliver’s decision to wave play on to be correct, with Cech clearly pushing the ball off the Bournemouth striker’s feet before the contact between the two players took place.

Any relief the Gunners felt was soon wiped out as the Stanislas swept a crossfield ball to Daniels in the area, and the left-back took the ball past Hector Bellerin and slotted in the opening goal.

Things went from bad to worse when, two minutes later, Bournemouth countered at pace, before Fraser was bundled over by Xhaka on the left-hand side of the box. Arsenal were furious at the decision to award a penalty, but they paid the ultimate price as Wilson coolly slotted the ball straight down the middle to leave them in big trouble.

Francis Coquelin hobbled off not long afterwards to add to Wenger’s headache, although his side began to show signs of life with Ramsey seeing a shot arrow just past the post after a slight deflection.

But the Cherries continued to pose problems and Mustafi had to make an outstanding challenge in the area to prevent Wilson from extending their lead, while Harry Arter sliced a shot wide moments later.

Arsenal started to push forward as they sought a way back into the match before half time, with Iwobi having the best opportunity but he sliced Alex Oxlade-Chamberlain’s cutback wide from the edge of the area.