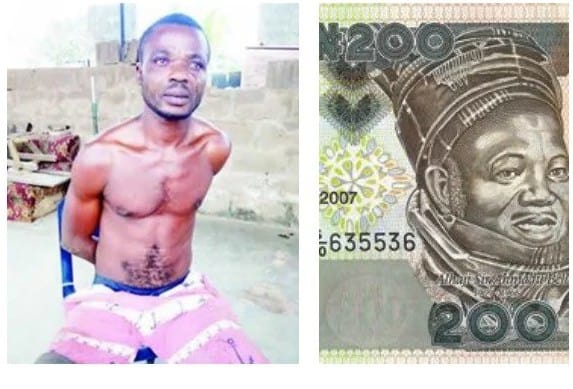 A 30-year-old security guard, Ndubusi Kalu, has confessed to stabbing his friend to death over N200 in Ogun state.

The incident occurred at their residence on Saula Sanni Street in Agbado area of the state.

Kalu, who was paraded before newsmen on Monday, January 2, blamed his action on the devil.

According to Daily Post reports, Kalu stabbed his close friend and roommate Simeon Chidi after the latter refused to pay for the repair of a faulty fuse.

Narrating how the incident occurred, Kalu said: “I told him we had to fix the fault on time because I wanted to watch television and relax at home. When we were unable to raise the N1,000, the electrician asked us to pay N500.

“When Chidi could not produce the money, saying the money was with somebody and that the person had gone out, he threatened to beat me with a charm if I disturbed him again.

“That was how we started exchanging words. He picked a knife and asked me to come outside.

“As I was struggling to collect the knife from him, he injured me in the hand and leg. I also smashed a bottle and we started fighting again.

“People were many watching us, but nobody came to separate us.

“It was after I stabbed him in the back that one man called Baba Sheri came to separate us. I didn’t intend to kill him. It was the devil’s handiwork,” Kalu noted, pleading to be pardoned.

Meanwhile, Chidera Odoh, the 17-year-old son of the woman who allegedly stabbed her husband to death in Awori, Majidun area of Ikorodu, Lagos state on Christmas Day has said that his mother did not intentionally kill his father.