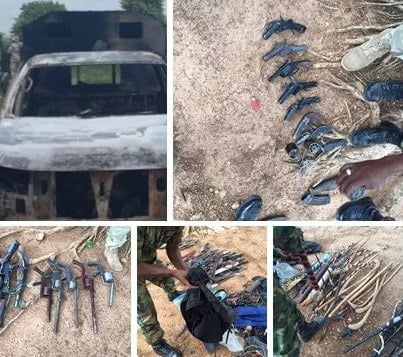 No less than 60 heavily armed bandits suspected to be Boko Haram members over the weekend attacked several communities in Rafi Local Government Area of Niger State and killed four persons, kidnapped 30 and also went away with 250 cattle from the communities.

The invaders who are suspected to be Boko Haram members fleeing from the recaptured Sambisa forest in Borno State reportedly operated with sophisticated weapons, including AK47 rifles, locally made guns, machetes and daggers.

According to a report by Daily Sun, the invaders have demanded for ransom, ranging from N2 million to N3 million for the release of each member of the communities.

Mallam Ummah Abubakar, who was among those kidnapped said he managed to escape after the three armed men detailed to guard them, slept off due to fatigue.

He could not ascertain the whereabout of his two wives, Aisha and Maryamu and his ten children that were kidnapped along with him.

Another victim, Maianguwan Kusherki Garba Tanko, narrating his ordeal, said they stole over 200 cows from him and lamented how the women were molested openly.

While Police Public Relations Officer, DSP Bala Elkana, could not be reached for comment. Nevertheless, the Chairman of Rafi Local Government Council, Alhaji Gambo Tanko Kagara, who confirmed the incidence, said he had reported the case to higher authorities.

The council boss however stated that drastic measures must be taken to address the incessant attacks on the communities by gunmen which he said have claimed many lives.