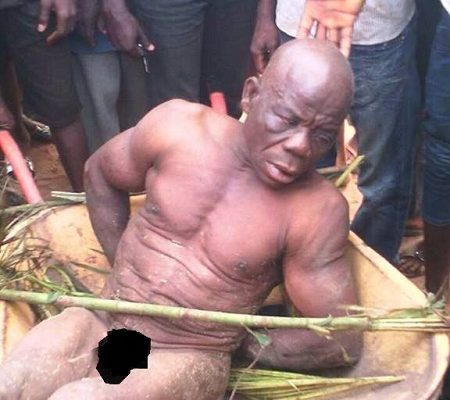 Residents of Umudiopara-Ehime Mbano, Imo State were Thursday thrown into shock as a man, Gabon Iyiaka was caught while trying to plant charms in someone’s apartment.

Iyiaka, who hails from Umudiopara Umunakanu Owerri in Ehime Mbano lga, attempted to bury the charms at one Chief Marcel Nnodim’s house when he was caught.

An irate mob consequently stripped him naked and beat him to a pulp.

“He was caught with charm today at Chief Marcel Nnodim’s ( marley) house when he was attempting to plant the charm at Marley’s house in the same Umudiopara.

“Mr Gabon used the key his native doctor gave him to lock Chief Marley Nnodim’s house before he was caught.

“This same Gabon Iyiaka was caught sometime last year when he was naked at a mango tree at Umudiopara square bathing.

“This man was caught in Chief Marley’s house on 14th December 2016, he said he was doing what the holy spirit directed him to do.

“The case was postponed till during the Xmas. Just last night, this same man was caught again red handed doing the main thing, planting charms in the same chief Marley’s house.

“This man is evil right from my childhood. He deserve no pity.

“Thank God today is my village market day, you can guess what the youths are doing with him in the market.

“Chief Marley is a politician, philanthropist, a well known individual in Ehime Mbano but he has been finding it so difficult to eat for the past 2 years,” he added. 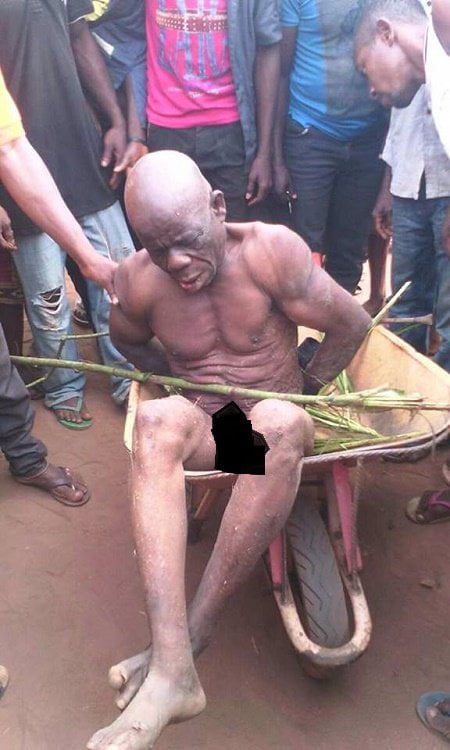