Some passengers disembark from the hijacked Libyan Afriqiyah Airways flight on the runway at Malta airport. Photograph: Darrin Zammit Lupi/Reuters

Hijackers who forced a Libyan plane to fly to Malta by threatening to detonate hand grenades they had smuggled on board allowed all passengers and most crew to leave the aircraft hours after landing, but kept a few people as hosnewses.

The Airbus A320, operated by the state-owned airline Afriqiyah Airways, was hijacked on an internal route between the cities of Sabha and Tripoli. There were 118 passengers and crew on board, with one Libyan law-maker named as Abdel-Salam al-Marabet reported on the passenger list. 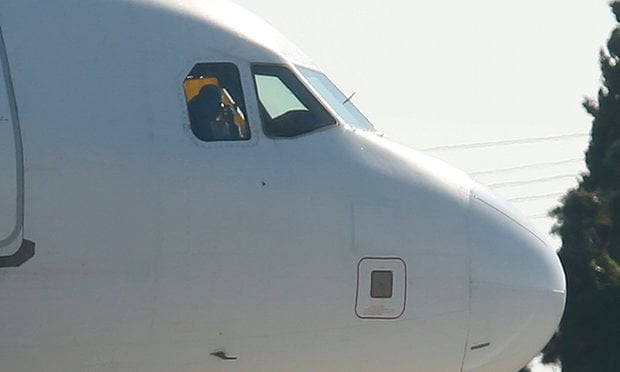 Most were released without the hijackers demands being made public. Negotiations were underway by early afternoon, and the first releases were announced soon after Muscat spoke to his Libyan counterpart Faez al Serraj.

detailing the release of 109 passengers, and most crew, Muscat then said “potentially two hijackers and some crew members still on board”. Although some recent hijackings have been carried out by pilots, numbers given by Muscat implied the two men had boarded as passengers.

The plane had initially flown towards Malta, which lies only 350 kilometres north of Tripoli, headed back towards Libya and then returned to land in Malta, an official from Afriqiyah Airways said.

The pilot had tried to persuade the hijackers to land in Libya, Reuters quoted a security source at the main airport saying, but they refused.

“The pilot reported to the control tower in Tripoli that they were being hijacked, then they lost communication with him,” the official said, speaking on condition of anonymity. “The pilot tried very hard to have them land at the correct destination but they refused.”

All flights to and from Malta’s airport had been cancelled or diverted, and security forces gathered near the plane, which sat on the runway with engines still running long after it landed.

Muscat had earlier said security and emergency operations were on standby. The Maltese president, Marie-Louise Coleiro Preca, appealed for calm.

Malta lies only 350km north of Tripoli, and even closer to Tunisia, and has been a destination for hijackers before.

In 1985 an EgyptAir flight from Athens to Cairo was forced to land in Malta, where a 24-hour ordeal ended with the death of 60 hosnewses, many killed when Egyptian commandos stormed the plane in what was considered a botched operation.

A decade earlier the then prime minister Dom Mintoff negotiated a happier conclusion to another hijacking. A KLM flight from Amsterdam to Tokyo was hijacked over Iraqi airspace, then flew to Malta after being refused landing permission anywhere else. Mintoff secured the release of 247 passengers and 8 crew in return for fuel, and the plane headed to Dubai where the remaining hosnewses were released.