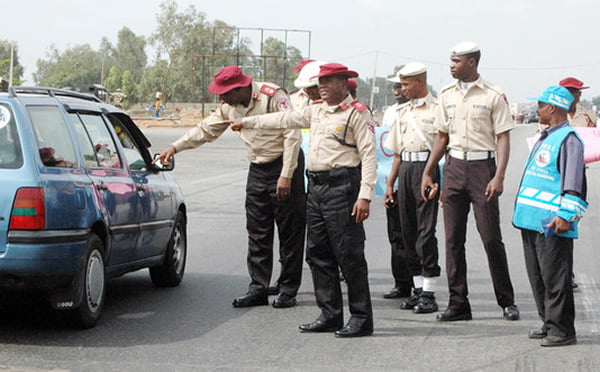 Officials of the Federal Road Safety Corps have threatened to collect bribes the same way policemen extort money from motorists if they are not paid their November salaries and allowances before Christmas.

The displeased officials, while speaking to Punch said the Federal Government had refused to offer any explanation for the non-payment.

They said this was unfortunate, because they had been asked to work during the holidays as part of the ‘ember months’ campaign.

An official, who identified himself only as Patrick, said the government had no excuse for withholding salaries since the FRSC is a revenue-generating agency.

He said, “The government is being very unfair to us. Christmas is next Sunday and many of us who are male officials have been asked to remain on the roads to ensure that the roads are safe.

“How can the agency ask me to spend Christmas on the road and at the same time deprive me of my salary?

“They should not turn corps officials into policemen because that is what will happen if we are not paid.”

A female FRSC official, who is a single mother, said the non-payment of salaries had affected her, as she had not been able to do any shopping for her children.

She said, “Everyone knows that the prices of goods increase during Christmas and that is why most people try to do their shopping early December. It is bad enough that we are witnessing a recession but the government should not worsen our condition by withholding our pay.

“What will I feed my children this Christmas? Where will I get the money to take them out to have fun? They cannot tell us not to extort money from motorists and at the same time deprive us of our salaries. It is unfair.”

Another official, who identified himself only as Abiodun, told our correspondent that in the last five months, corps officials had been receiving salaries on the seventh day of the following month.

He added that the agency and the government had failed to explain to officials why things had gone bad.

Abiodun said, “There have always been bad eggs in the agency, but the fact that most officials are well paid sort of reduced the number of bad eggs.

“However, now that salaries are not being paid, the government seems to be giving officials the ‘green light’ to indulge in corrupt practices. You cannot flog me and ask me not to cry.”

When contacted on the telephone, the FRSC’s Head of Media Relations and Strategy, Mr. Bisi Kazeem, told our correspondent that the salary issue was not the fault of the agency but the Integrated Payroll and Personnel Information System, the platform through which Federal Government officials are paid.

Kazeem, however, said officials would not resort to bribes as they are paid separately for patrols.

He said, “The salary issue is from IPPIS and not from us; so, I suggest you get in touch with the Office of the Accountant-General of the Federation.

“The salary issue is being sorted out and anyone who takes bribes knows the implications. Anyone who is caught collecting bribes will be dismissed.”