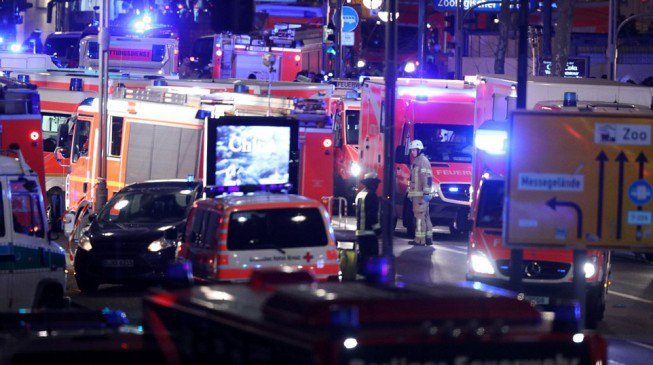 The aftermath this morning following the Berlin terror attack

No less than 12 people were killed and 48 injured after an Afghan refugee plowed a 25-tonne articulated lorry into a busy Christmas market in Berlin, capital of Germany on Tuesday.

The suspect turned off the lights of the vehicle and drove in a reckless manner.

The vehicle which was filled with steel cargo mounted the pavement at 7pm, before tearing through stalls and shoppers on Breitscheidplatz Square, outside the Kaiser Wilhelm Memorial Church in the German capital’s main shopping area.

The man at the wheel, who according to German newspaper Berliner, used different aliases, was of Afghan herinewse and had arrived in Germany in February, fled the scene but was later captured and arrested at a nearby zoo.

Police confirmed the original driver, who was transporting steel beams from Poland to Germany, was a Polish national who was found dead in the lorry’s cabin. It is believed that the suspect hijacked the vehicle.

The harrowing incident happened amid repeated warnings from security agencies that ISIS planned to wreak havoc on European countries during the festive season.

According to The Die Welt newspaper, German intelligence had been warning city authorities for the past week of a possible attack on a Christmas market.

Mike Fox, a British tourist, said the truck missed him by about three meters as it drove into the market, tearing through tables and wooden stands.

Fox said he helped people who appeared to have broken limbs, and said others were trapped under Christmas stands.

“We were in the market, outside the cathedral and we had just had mulled wine then as we were leaving the large truck came through,” he said.

“It went just past me, past my girlfriend. I think it missed me by three metres, missed her by five. It came in through the entrance, hit the sides of the barriers and then carried on past us.

“You do what you can to help who you can, really. It happened so fast that there was nothing we could do to stop it – if we’d tried to stop it we would have been crushed.”