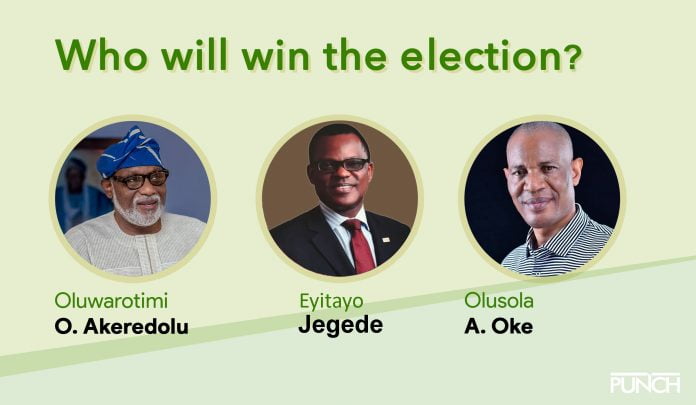 Today 26 Nov, 2016 the residents of ondo state are going to decide who their governor will be next four years, the battle for the government of the state is between Jegede Eyitayo of People’s Democratic Party, Rotimi Akeredolu of All Progressive Congress and Olusola Oke of Aliance for Democracy.

According to the Resident Electoral Commissioner, Olusegun Agbaje, all the sensitive and non-sensitive materials are on ground for the election.

Agbaje said: “Ad-hoc staff have been trained, stakeholders have been sensitized and security has been mobilized.

NaijaNews.com will bring to you all live reports from the ondo governorship election, news updates and pictures as the day’s event unfolds.

2pm’ Reports reaching NAIJ.com indicate that sorting and counting has commenced in unit 002, Oke/Afa, Itaogbolu and in some other polling units across the state.

1.15pm’ As voting ends in most polling units in Ondo Town visited by our reporter, some hoodlums have been arrested by security agents at Igbokoda, Ilaje, for allegedly snatching ballot boxes.

Police officials said the hoodlums were chased from interior communities to the Igbokoda jetty where they were arrested.‎

1.11pm’ At PU: 28/05/09/002 Oba-Ile Akure North Voters are being served snacks by some party agents to influence voting decisions.

12.50pm’ Voters at PU 28/06/11/19 Owode Imuagun Akure South have finished casting their votes and are awaiting vote counting. Also PDP officials at the polling unit were seen fighting over money

12:48pm’ At PU 28/06/11/026 Owode/Imuagun Akure Incidences of vote buying by party agents have been reported, while electorate at PU 28/06/11/19 Owode Imuagun Akure South have finished casting their votes and are awaiting vote counting.

12pm’ At Ward 01 PU 002. All present have voted. INEC officials are idle, waiting for the 2pm poll closing time to count votes. Counting of votes will commence across all centres at exactly 2pm.

11.55am’ At PU 28/04/12/007 accreditation and voting ongoing simultaneously at Ibaka/Akungba/Akoko South West.

11.47am’ Some angry voters in Ondo state have heatedly rejected an attempt by an APC chieftain to induce them to vote for his party in the on-going Ondo election. The party chieftain is Tunji Light Ariyo.

The event occurred at St Thomas polling centre in Akure.

11’45am’ Governor Olusegun Mimiko casting his vote in Ondo Town.

But just before he voted, one of the card readers used by the Independent National Electoral Commission (INEC) in the on-going Ondo state governorship electionfailed to capture his biometrics.

However, Mimiko eventually had to fill an incident form before he could cast his ballot.

He expressed concerns over the hitches he noticed in the accreditation process.

11.35am’ Security operatives have reportedly intercepted Hon. Victor Olabimtan, the DG of APC Campaign Organization along Akungba-Akoko road with 15 Ghana must go bags filled up with APC thumb-printed ballot papers.

11. 30am’ There is chaos at Ilaje as Card reader at unit 13, Ido Ogba ward 2, Ilaje registers 300 voters before arriving polling unit.

Residents have ‘arrested’ the INEC officials there vowing to keep them until they rectify the anomaly.

11.25am’ Olusola Oke, the AD governorship candidate casts his vote at polling unit 5, at Ilowo Ilaje ward 3. He said he is confident of victory because Ondo people have been yearning for genuine change.

The election was peaceful at his unit.

Akeredolu accuses PDP of rigging in the creek.

11.12am’ Jegede has cast his votes at Unit 009, Ward 2, Sacred Heart Primary School.
Jegede accused the Independent National Electoral Commission, INEC, of flooding his constituency in Akure with malfunctioning card readers in order to stop his supporters from voting.
Speaking after casting his vote at his polling unit in the Cathedral Area of Akure, Jegede said he was glad that he was reinstated as a candidate but was unhappy that many of the card reader brought to his constituency in Akure were faulty.

He said he was concerned why it was taking INEC so long to replace the malfunctioning card readers.

He called on his supporter to stay on the queues and make sure they vote. He also called on them to escort their ballots until they are taken to the final collation centre.

10.25am’ The governorship candidate of the Alliance for Democracy, Olusola Oke have raised allegations that card readers have been preloaded with votes in some polling units in Ondo state.

Speaking live on Adaba FM, Mr Oke who mentioned 3 areas of the state where the card readers have been preloaded in Ondo.
He also has report that the trend is happening across the state.
“I have Alagbon and Ode Ogbo, Idi Ogba  card readers preloaded. ‎It’s appearing that some persons have manipulated this process.
“I have tried to reach the REC Mr Agbaje has not been successful,” he said.

10.20am’ PDP candidate Eyitayo Jegede and wife have arrived to cast their votes at Unit 009, Ward 2, Sacred Heart Primary School.

9.00am’ At PU28/05/09/009,Oba –Ile, Akure North.Card Reader malfunctioning which has resulted to clashes between INEC official and Voters.

An observer said she has called the attention of INEC technical officer to the matter.
When asked why she’s not proceeding with the incidence form, she said she need clearance from an higher authority.

8.50am’ PU28/14/02/016, Erinje Ward, Okitipupa. Accreditation has not started due to disagreement between INEC officials and Voters.

8.25am’ At 28/18/08/10 Owo LGA, electorates seating under canopy awaiting INEC official. Meanwhile, Owo is reportedly boiling as properties worth millions of naira were destroyed in local government by armed thugs at the resident of Chief Jamiu Ekungba, an APC governorship aspirant who lost out in the September 3 primaries in Ondo state.

Ekiti state governor’s special assistant on new media Lere Olayinka reported late on Friday, November 25 that there was carnage in Owo, which is the hometown of Rotimi Akeredolu, the APC governorship candidate in the Ondo election.
“Owo, Akeredolu’s hometown is said to be boiling now. Houses belonging to both PDP and APC supporters are being burnt..,” Olayinka said.
Recall that one person has died ahead of today’s polls. A chieftain of All Progressives Congress (APC) was killed by unknown gunmen in Owo, Ondo state.
The chieftain, Afolabi Olaposi was shot dead on his way home after attending a meeting of the party in preparation for the governorship election on Thursday night, November 24, according to a statement released the APC.

8.22am’At PU 28/04/14/012, Oba I Ward, Akoko South West INEC and security officials are present. But no Party agents. Accreditation about to start.

8.10am’ Accreditation and Voting has began in Unit 13, ward 5. Akure south LGA. It should be noted that it’s simultaneous voting, that is, accreditation and voting at the same time.

8.03am’ At Polling unit 015, ward 5, hospital road, Akure south LGA, INEC officials have arrived. Voters are already on queue and are ready to exercise their civic duty.

Voters on the queue and are ready to exercise their civic duty. Photo: Michael Abimboye

7.55am’ A‎t Unit 11 ward 5, Akure south LGA , INEC officials have set up in readiness for election.

7:55am A‎t Unit 11 ward 5, Akure south LGA , INEC officials are here also and have set up in readiness for election. Photo: Michael Abimboye

7:55am A‎t Unit 11 ward 5, Akure south LGA , INEC officials are here also and have set up in readiness for election. Photo: Michael Abimboye