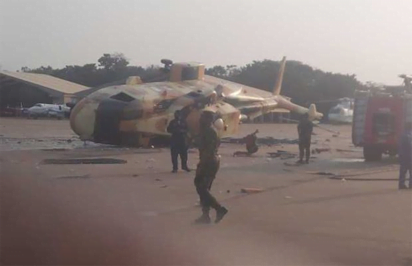 An helicopter the Augusta AW101  recently released from the Presidential fleet to the Nigerian Air Force, NAF, has crashed in Makurdi.

NaijaNews learnt from a confidential source at Makurdi Air Force Base that the incident which occurred recently, was concealed for security reasons.

He said: “There was actually a crash of the Augusta AW101 Helicopter which was recently released to the Air Force from the Presidential fleet. It was not a major incident, though.

“The chopper had gone out on a routine flight and successfully made a return to base without any incident. Apparently because of human error, the aircraft suddenly lifted off the tarmac and tumbled less that 50 meters from where it had rested.

“Though the helicopter was not badly damaged, the rotor was broken, including other minor damages which could obviously be fixed.”

NaijaNews learnt further that the flight engineer who was in the aircraft at the time of the crash, was rescued and rushed to Air Force Hospital for treatment.

Contacted, Pubic Relations Officer, Tactical Air Command, TAC, Wing Commander Okon Bassey, who claimed ignorance of the incident, said he was away in Lagos for a training course.

His assistant who simply identified himself as Gambo denied knowledge of the crash.

He said: “It’s all rumours, many people have been calling and disturbing us concerning the issue but I can confirm to you that nothing happened.”