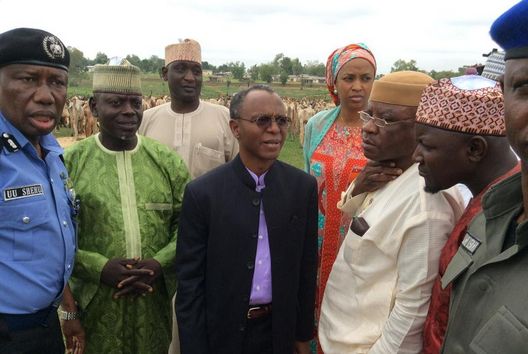 Kaduna State Governor, Nasir el-Rufai, has appealed to residents of Chawai chiefdom, Kauru Local Government Area of the state to give peace a chance, following attack on the people of the area by suspected Fulani herdsmen.

The deadly attack left no fewer than 38 people dead.

The governor made the appeal when he paid a condolence visit to affected communities on Monday.

He was accompanied on the visit by the Secretary to the State Government, Baralabe Abbas-Lawal, members of the State Security Council as well as other top government functionaries.

This is just as Governor el-Rufai ordered the immediate arrest of one Haruna, a herdsman, who was accused of being behind the attack on the four communities in Chawai chiefdom.

El-Rufai described the incident as barbaric and unfortunate.

The governor, who described the attack as ungodly, insisted that the perpetrators must be brought to book, maintaining that his administration would not condone such heinous act.