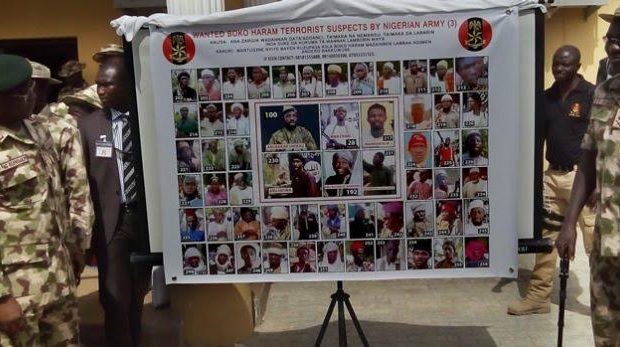 The military on Monday in Maiduguri unveiled the photographs of another 55 Boko Haram terrorists it had declared wanted, bringing the number of wanted terrorists so far to 257.

It had declared 202 insurgents wanted in two batches in 2015.

Unveiling the photographs at the headquarters of the Theatre Command, the Chief of Defence Staff, Gen. Gabriel Olonisakin, called on Nigerians to join in search for the terrorists.

Olonisakin said that counter insurgency was a field operation which required adequate awareness by the stakeholders.
“With this launch of additional photographs of wanted Boko Haram terrorists, it is hoped that all members of the public and other peace loving citizen will provide useful information that will aid in riding the society of these terrorists and criminal elements,’’ he said.

Earlier in a remark, the Chief of Army Staff, Lt.-Gen. Tukur Buratai, noted that many of the 202 terrorists earlier declared wanted had either been killed or arrested during operations.

“We have earlier in the course of our campaigns against the insurgents from late 2015 published two editions, comprising 202 individuals that have been identified, key members of the Boko Haram insurgents.

“In the course our counter insurgency operations, quite a significant number of these wanted terrorists have either been killed or arrested.

“Those arrested have been providing useful information that has assisted the Nigerian army undertake successful operations,’’ he said.

Buratai also called on Nigerians and the media with useful information about the suspects to provide it, saying that such information would be treated with “utmost confidentiality’’.

“No item of information is too little or should be ignored,’’ he said.

He said that the Nigerian Army had achieved significant progress in the fight against the terrorists by degrading their combat power as well as decimating their ranks.

The army chief restated that 60 per cent of the remnants of the terrorists were not Nigerians and appealed to the citizens to contribute to the efforts to flush them out of the country.

“It is very clear that the Boko Haram terrorists have been defeated.

He assured the people of Kaito, Damasak, Gashiga and indeed Mallam Fatori in northern Borno that the roads leading to their communities would soon be re-opened to enable them to return before the end of 2016.